You are here: Home / MidEastGulf / China calls for political solution for Syria 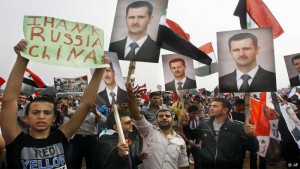 China’s foreign minister has repeated a plea for the crisis in Syria to be resolved politically, during a meeting of the permanent members of the UN Security Council, the Xinhua state news agency reported on Wednesday.

Russia and the United States, two other permanent members, agreed on Monday to look for a diplomatic end to the Syrian civil war but clashed over the central question of whether Syrian President Bashar al-Assad should retain power.

Chinese Foreign Minister Wang Yi told the meeting at the United Nations that the five permanent members “should unite and seek the opportunity to politically solve the Syrian crisis as the parties are showing more willingness to do so”, Xinhua said.

The convening of a third Geneva peace conference at an appropriate time “should be considered and conditions conducive to the opening of such a conference should be actively created”, Wang said, according to the report.