You are here: Home / West Asia / China: anti-terror efforts pay off in Xinjiang 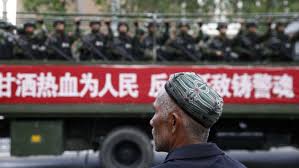 There were no terrorist attacks in the Xinjiang Uygur autonomous region last year, the region’s chairman said as he discussed the regional government’s efforts to keep the social situation calm, like reported by thestar.com.my.

A series of new anti-terrorism measures have been introduced since Chen Quanguo became a Party secretary of Xinjiang in 2016.

They included setting up a network of police stations in all cities and townships to quickly react to any emergency.