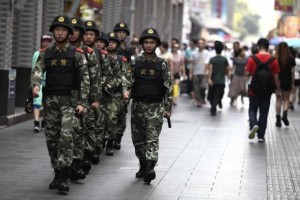 About 3,000 armed personnel in Northwest China’s Xinjiang Uyghur Autonomous Region went on patrol in Urumqi after attending an anti-terrorism oath-taking rally over the weekend, in an effort to fight terrorism and tighten security in the region, the Xinjiang Daily reported on Sunday.

Two thousand armed police and 1,000 SWAT officers were assigned to the regional capital Urumqi’s main roads and areas after completing an anti-terrorism drill at the rally on Saturday.

The last anti-terrorism oath-taking rally was held in May 2014 in Urumqi, China News Service reported.

The rally was held after the recent terror attack in the region, where two people and three assailants were killed. Three people entered the premises of the Moyu county committee on a vehicle on Wednesday, and attacked workers with knives and detonated an explosive device, the Xinhua News Agency reported.

Force protection, anti-attack operations on police stations and counter-hijacking operations were among the five subjects included in the drill.