WITH ISIS rapidly losing ground in both Iraq and Syria, French jihad experts have warned that hundreds – if not thousands – of disillusioned fighters could now begin to return to Europe, along with their wives and traumatised children 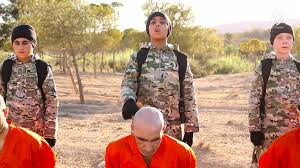 French officials, however, do not know what they are supposed to do with the offspring born to battle-hardened jihadist veterans; an issue which has become a pressing concern now that Syrian president Bashar al-Assad is poised to win the bloody war against the world’s most deadly terrorist organisation.

In May, Patrick Calvar, the head of France’s DGSI internal intelligence agency, said some 400 French minors were currently living in ISIS-controlled areas.

Mr Calvar said two-thirds had fled France to join the ranks of ISIS with their jihad-obsessed parents, and that one third were born in Iraq or Syria and were under the age of four.

The intelligence chief added that the children of returnees were “ticking time bombs who hated democracy and the West,” and that they had been “trained and brainwashed by Isis”.

Mr Calvar added that the children had to be taken into care and reintegrated into French society, but warned that it could take years to turn them into law-abiding citizens – longer if they had been trained to kill.

Eric Sandlarz, a psychoanalyst who has assisted torture victims, including former child soldiers, for more than 14 years, told the French daily Le Parisien that what these children desperately needed was “psychological help”.

He said: “They need therapy, yes, but they also need to be reintegrated into the formal education system, they need help finding a job, and they need access to medical care. We basically need to help them start over.”

Mr Sandlarz added that the most important thing was to help the children remember what their life was like before it was shattered by ISIS.

He said: “ISIS turns people into weapons. We need to help these children – who have been brainwashed – think for themselves, something they no longer know how to do.

“We need to ask the child what his life was like before ISIS, to help him get his old life back. A radicalised youth is a like a tree that has been uprooted. But the roots are still there.”

But the psychoanalyst said that it would be a lot harder to ‘de-radicalise’ children born and raised under ISIS rule.

He said: “These children have no roots – ISIS was their life, they know nothing else. These children won’t have any point of reference other than jihadism, and so the ideology will be a lot more difficult to dislodge.

“But children are quick learners. Some refugee children, for example, learn how to speak a new language in less than six months.”

Mr Sandlarz added that he was “not optimistic” about the displaced children’s future, because not enough was being done to help them get back on track and back to reality: “These children will be coming back to France soon. The risks at stake are profound, and represent a threat to society.”