You are here: Home / Senza categoria / Child terror fears as number of kids stopped from travelling to ISIS zone doubles 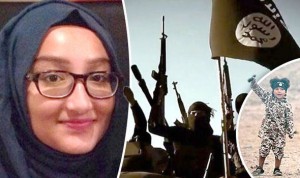 In the last 12 months 50 youngsters have been stopped by security services from travelling to the Middle East.

That figure is more than double the previous 12 month tally, when 23 kids were banned by family court judges.

The statistics, revealed in a freedom of information request by The Sun, show a worrying trend of radicalised British teenagers seeking to bolster the jihadi group’s terror army.

Many foreign fighters who have travelled to the region have died fighting and terror expert Neil Doyle said youngsters from the UK were risking their lives.

He said: “The courts may have saved the lives of these children by preventing them from being moved to perhaps the most dangerous place on Earth.

“At least two British children have featured in gruesome videos and the group is increasingly relying on child fighters.

“It is short of manpower due to a very high casualty rate which has seen 50,000 fighters killed so far.”

Around 850 people from the UK have travelled to to jihadi strongholds in Syria and Iraq, and about half have since returned to the UK.

Four-year-old Isa Dare – who has been dubbed ‘Jihadi Junior’ – was shown in a twisted propaganda film which shows four men being killed by a car rigged with explosives – perhaps the most high profile youngster to have been taken to Syria.

Among the other youngsters to have died is Khadiza Sultana, one of three London school girls who travelled to Syria via Istanbul in February 2015.

The 17-year-old is believed to have died in a Russian airstrike on Raqqa in May this year.

Talha Asmal, believed to be Britain’s youngest ever suicide bomber, died in June after he detonated a truck bomb attacking an oil refinery in northern Iraq.

The A-Level student left his home in Dewsbury, West Yorkshire, a year earlier with a friend.

His family said he was “ordered to his death by so-called ISIS handlers and leaders too cowardly to do their own dirty work”.

Eighteen-year-old Jack Letts, a Muslim convert, is another high profile young Briton to have travelled to the region.

His parents are accused of sending their son £1,723 in three separate payments after he allegedly joined ISIS.