You are here: Home / MidEastGulf / Child soldiers of Iraq, Yemen 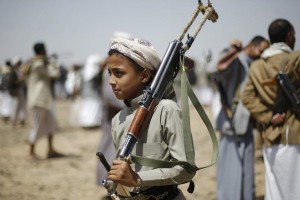 International law forbids recruitment of children. This prohibition is found in Protocols I and II of the Geneva Conventions, the Convention on the Rights of the Child and other international agreements. The Statute of the International Criminal Court (ICC) considers “conscripting or enlisting children” a war crime, whether it took place in international or local armed conflicts.
Despite this clear ban, reliance on child soldiers has been on the rise, especially by terrorist groups and militias, reaching dangerous levels in Iraq and Yemen, where in the latter children account for one third of the fighters, according to UNICEF, Human Rights Watch and media reports.
Today, I will focus on the recruitment of children by the Houthis in Yemen and Popular Mobilization militias in Iraq.
In Iraq, Popular Mobilization militias are increasingly relying on children. And just like the terrorist group Daesh, which recruits and brainwashes children to carry out unspeakable atrocities, the Popular Mobilization militias employ similar methods. Their model is Iran’s Basij militias, which played a key role in the Iran-Iraq war (1980-1988) and Basij children bore the brunt of that war.
A recent report by Iran Pulse quoted an Iraqi academic as saying, children fighting with Popular Mobilization militias “are trained to fight against the Sunni opposition, western countries and Israel; and to establish Imam Mahdi’s universal government.”
They are indoctrinated by clergy at their camps to fight ferociously and to “seek vengeance” for past injustices.
Iraq’s Minister of Transportation Hadi Al-Ameri heads the Badr Organization, an especially brutal militia that was established by the Iranian Revolutionary Guard Corps (IRGC) and fought alongside Iranian forces against Iraq. IRGC recruited child soldiers on a massive scale in both Iran and Iraq. The Basij (Organization for Mobilization of the Oppressed) was established in 1979 and charged with training and deploying child soldiers.
Al-Ameri has been made commander of all Popular Mobilization militias. His lieutenant Abu Mahdi Al-Muhandis is on the United States wanted terrorists’ list.
Iraq’s Popular Mobilization militias are modeled after Iran’s Basij in organization, objectives, fighting methods, propaganda and political activism. They share religious orientation and beginnings. Just as the Basij were founded on Ayatollah Khomeini’s orders, Popular Mobilization militias were encouraged by Ayatollah Sistani. Both rely on clerics who indoctrinate children in sectarian religious dogma, including the pernicious principle of (Velayet-e faqih), dictating complete obedience to Iran’s Supreme Leader and other clergy, not civil institutions of the state.
They are also similar in their use of child images in war propaganda. They glorify “child martyrs,” as in the story of Mohammed Hossein Fahmideh, a 13-year-old boy from Qom, who ran away from home to join the army and was killed in a suicide attack against Iraqi tanks in 1980. He was considered a national hero in Iran and frequently used to mobilize young recruits.
Houthi militias in Yemen are similar to Basij and Popular Mobilization militias in goals, organization and fighting methods, with some minor differences, and like them rely increasingly on children, who now constitute about one third of their troops.
Human Rights Watch’s detailed report (Yemen: Houthis Send Children Into —Using Child Fighters Violates International Law) relied on eyewitness accounts and interviews with the children and their recruiters, trainers, and minders, concluding that Houthis have increased their use of children after their takeover of Sanaa in September 2014. Children as young as 12 were used as soldiers, guards, scouts and runners, transporting weapons and ammunitions.
HRW also concluded that children were first indoctrinated along sectarian lines, followed by military training. Militias provided food, Qat and ammunitions.
Numbers of child soldiers are staggering: In an internal document made public recently, a senior Houthi leader instructed the deputy minister of education to exempt child soldiers from final exams, demanding that all 4,840 children listed by name were passed to the following grade without exams, “due to the circumstances that forced them to defend the country.”
Qat (aka Khat) is an important weapon in Houthis’ arsenal. They have removed the social stigma about giving it to children, and instead distribute it freely and encourage them to use it. Once hooked on the stuff, the children would not run away, Houthis seem to believe.
In addition to earning child soldiers’ loyalty, Qat affects their behavior to become daring and fearless. Similar to speed or amphetamine, Qat users could experience feelings of euphoria, hyperactivity, confidence and illusions of increased strength, endurance and alertness. Qat frequently impairs inhibition (similar to alcohol), and induces thought disorder, hallucinations and psychoses in some cases. Those feelings could make the addicted child brutal and reckless.
Abuse of children in this fashion and exposing them to war and drugs demonstrate the cynicism of those sectarian militias and their Iranian handlers, in violation of all international agreements about protecting children.