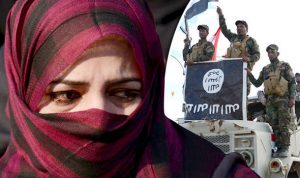 A female Islamic state support in Germany is facing trial on charges of child abuse for taking her young children to join the terror group. like reported by breitbart.com.

The unnamed woman, born in Dresden in 1976, is said to have dragged her four children aged between three and nine to Syria to join the Islamic State terror group in September of 2014.

She spent two years in Syria with the terror group and even bragged in an interview with Arabic media that she had participated in fighting, and that her eldest child had even been shot, German news website Nordbayern reports.

The woman is now being brought before a court in Nuremberg by local prosecutors charged with child abuse which was confirmed by lawyer Friedrich Weitner late last week. The 40-year-old woman initially returned to Germany in November of 2016 and was arrested on charges of refusing to pay fines for theft and fraud.

Prosecutors made it clear that the woman was not being brought up on terror charges in this case, despite joining and claiming to have fought for the Islamic State group in the interview with Arab media. Instead, they said terror charges will be investigated separately and so far the woman has formally denied to police any links with terrorist organisations.

The German government has known about the woman’s sympathy for radical Islamic ideas as early as 2014 when she was investigated by the Nuremberg state prosecutor. The prosecutor spokeswoman Anita Traud claims that the authorities thought that the woman could have been plotting “serious state-threatening violence” but no formal charges were laid at the time.

The case bears similarity to one in Sweden in which a Muslim convert and so-called “Islamophobia” expert Michael Skråmos packed up and took his family to Syria where he is believed to remain today in the Islamic state capital of Raqqa.  Most recently Skråmos has stopped attempting to recruit for the terror group and has instead called for supporters to attack targets in Sweden.

Germany, like Sweden, has also had to deal with many Islamic State fighters returning from Iraq and Syria. In March a man named Anil O. was arrested after returning from the region having worked as a medic or the group.

Last year it was also revealed that returned ISIS fighters, who had allegedly been “deradicalised,” were producing ISIS propaganda videos and many had rejoined the radical Islamist Salafist scene.