You are here: Home / Europe / Chiefs of Staff of coalition against Islamic State meet in Madrid 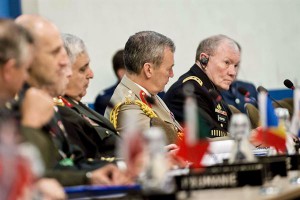 About a hundred military representatives from 30 member countries of the international coalition against the Islamic State started their 7th Conference.

The goal, according to the Spanish Ministry of Defense, is to keep informed the participating countries and seek their assessments of the development of the struggle against the terrorist group.

Spain’s military authorities claim, that by hosting the meeting, they are reinforcing their commitment to the international coalition in its goal of defeating Islamic State in Syria and Iraq.

Currently, Spanish military representatives are integrated into the headquarters of the Coalition and are training Iraqi units in Besmayah and Iraqi special operation units in Baghdad and Taji.

The meeting takes place before the opening of an international conference for the fight against violent extremism tomorrow, with 40 former heads of state and government and 200 experts, which will be closed on Wednesday by Secretary-General Ban Ki-moon.

During the meeting is expected to be approved the document Global Consensus as a development of the idea that military means alone are insufficient to face the problem.

The UN Secretary-General will attend on Wednesday the final panel of the conference along with the Spanish Minister of Foreign Affairs, Jose Garcia-Margallo, among others.