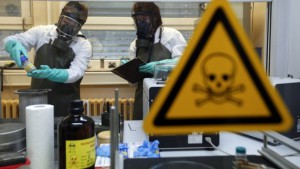 The threat of weapons of mass destruction falling into the hands of non-government groups is widely recognized, the Russian Foreign Minister said.

The issue emerged in light of evidence that militants from Islamic State (IS, previously ISIS/ISIL) and other terrorist groups not only repeatedly used “toxic industrial chemicals,” but also “proper chemical warfare agents,” Lavrov said. He added there is a growing threat of similar crimes being committed in Libya and Yemen.

There is intelligence about terrorist groups acquiring access to scientific and technical documentation for the production of chemical weapons, and seizing equipment needed for such production, according to Lavrov. This involves foreign specialists in order to master the synthesis of chemical warfare agents.

Lavrov mentioned incidents in the town of Marea, 25 kilometers north of Aleppo in northern Syria in August-September 2015.

In October, the Organization for the Prohibition of Chemical Weapons (OPCW) released a report saying that mustard gas had been used during fighting between IS and other militant groups in Marea. The gas is known to cause severe delayed burns to the eyes, skin and lungs.

“It leaves no room for doubt that chemical terrorism is now turning from an abstract threat to a harsh reality, which can and should be stopped by intensifying serious work at an international level.”

Lavrov has suggested developing a separate convention to counter acts of chemical terrorism. According to the minister, the current norms of international law “don’t solve the problem of forbidding the use of chemical weapons by non-governmental organizations.”

“To eliminate such problems by adding amendments to the Chemical Weapons Convention is a problem” as it includes “too complex, lengthy and bulky procedures.”

“A more realistic, reliable and promising means of tackling this problem is to develop a separate convention for battling the acts of chemical terrorism.”