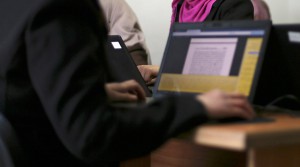 Chechen police have detained three female con artists who talked fighters of the terrorist group Islamic State into sending them money for traveling to Syria.

The young women turned the tables on Islamic State (formerly ISIS/ISIL) by using their primary recruitment tool, social media, against them. Russia’s predominantly Muslim Chechen Republic is a prime target for Islamic State propagandists, who call on young men and women to join their cause and travel to the Middle East to become join their jihadist campaign.

But with the Chechen girls apparently the joke was on Islamic State, as they made a business of meeting recruiters online and pretending to be eager to go to Syria. The only obstacle, they said, was the lack of travel money, which the recruiters were often willing to provide. Once the money was sent via anonymous electronic transfers, the swindlers would simply cash the money and delete the social media account used in the con.

The three-girl operation managed swindle some $3,300 from Islamic State recruiters before being caught by a Chechen police E unit specializing in monitoring online activities for evidence of crimes, Moskovsky Komsomolets newspaper reported.

“I don’t recall any precedent like this one in Chechnya, probably because nobody digs deep enough in that direction,” Valery Zolotaryov of the E unit told the newspaper. “Anyhow, I don’t advise anyone to communicate with dangerous criminals, especially for grabbing quick money.”

The young women may have exploited IS in this case, but mostly it happens the other way around. Even one of the Chechen swindlers was considering taking up the offer and going to Syria rather than pulling out, she told LifeNews.

“Many people I know did go, but I know no one for whom it turned out well,” she said.

Islamic State is a radical militant movement that took control of large swathes of Syria and Iraq and aspires to create a Sunni Muslim theocracy there. It is a major regional threat that was considered serious enough for US to band together a coalition of countries and start an bombing campaign against it.

But the Islamic State recruitment drive, which targets Muslim communities around the world, including in Europe and the US, is a cause of serious concerns for those governments, who face the threat of their citizens returning from the Middle East with combat experience and a willingness to commit terrorist attacks on home soil.