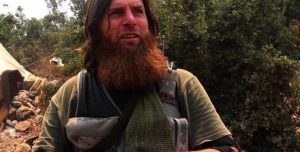 Chechen Muslim Şişani, the leader of Jundu Sham group listed as “terrorist” by the US and the UN Security Council, has been reported to have participated in the operation against Afrin along with his group, like reported by anfenglish.com.

An article confirming that other groups are participating in the operation Turkey launched against Afrin along with the Free Syrian Army (FSA) under their control has been served by the pro-AKP newspaper Akit. According to the newspaper’s article, Chechen Muslim Şişani, the leader of Jundu Sham formed by the Circassians in Syria, has participated in the operation against Afrin alongside Turkish soldiers with his group.

Şişani is known to be among those who fight against Russian Russian forces in Chechnya and Northern Caucasus in Ingushetia in the Russian Federation and is listed in the terror list prepared by the US and the UN Security Council.

The US defined Şişani as an “international terrorist” in 2014 and included him in the sanctions list. The UN Security Council added Şişani to the terror sanctions list last year.

This man is said to be Murad Margoshvili Muslim Al Şişani born in the former Soviet Union republic Georgia Soviet Socialist Republic. Şişani’s name is listed as one of those fighting against Russian forces in Chechnya and Northern Caucasus in Ingushetia in the Russian Federation.