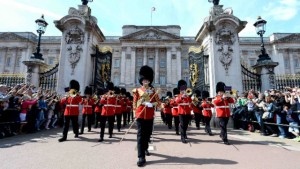 The military spectacle, which usually takes place on alternate days from August to March, will now happen on set days – Mondays, Wednesdays, Fridays and Sundays – during this period, according to express.co.uk.

The time of the event is also being brought forward by half an hour, with the ceremony at the Palace taking place at 11am, rather than 11.30am.

Thousands of tourists flock to the Queen’s official residence to see the soldiers in their red tunics and bearskins processing to and from the historic building to the sound of a military band, and it remains one of London’s most popular attractions.

The Metropolitan Police announced it was boosting protective security measures at the ceremony in December in a bid to prevent a Berlin-style lorry attack after a truck packed with steel ploughed into a Christmas market in the German capital, killing 12 people.

For the next three months, roads around the Palace are closing to traffic at certain times of day when the ceremony is taking place, and additional barriers now maintain security for the guard movements.

The current threat level for international terrorism in the UK is “severe”, meaning an attack is highly likely.

A spokesman for The Royal Parks said: “This new programme allows the public, visitors, motorists and businesses to forward plan following new road closures on Guard Change days which were introduced in December as part of ongoing security measures aimed at keeping the public safe.”

From April to July, Changing the Guard takes place each day.

The Army said it had not been decided whether to switch the daily event to set days in the summer as well.

During the traditional ceremony, which is also known as Guard Mounting, the Old Guard – the soldiers currently on duty – line up in front of the Palace and are replaced by the New Guard which arrives from Wellington Barracks.

The New Guard is accompanied by a Band or Corps of Drums and the ceremony represents a formal handover of responsibilities.

The duty is usually carried out by one of the five Foot Guards Regiments of the Household Division.