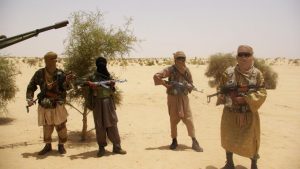 Sudan and three other countries Chad, Libya and Niger, agreed to “coordinate the actions” of their armed forces to fight against the transnational “crime” in the region, say two statements issued in Niamey and Khartoum, like reported by sudantribune.com.

The four countries “agree on the establishment of a cooperation mechanism for border security and the fight against transnational organized crime”, says a statement issued in Niamey after the meeting.

The statement says “the southern area of Libya became a hotbed of “serious persistent threats for the four countries”. This zone “serves as a base for” terrorist organizations”,” traffickers of all kinds and armed groups hostile to neighbouring countries” adding they aggravating the Libyan crisis by engaging in mercenaries activities.

In a statement released in Khartoum, the foreign ministry said it was agreed to hold a meeting at the expert level in Ndjamena on 3 May to study a draft protocol on security cooperation between the four countries, stressing it would be signed in Khartoum at a date yet to be determined.

The fragile security situation in the sub-Saharan region, amplified by the Libyan crisis, push to believe that the region would be the sanctuary of jihadist groups as they still have some pockets in northern Mali despite a Franco-African military operation in January 2013.

A similar meeting was held in Niamey on 16 March 2018, including Germany, Burkina Faso, Ivory Coast, Spain, Guinea, France, Italy, Libya, Mali, of Mauritania, Niger, Senegal, Chad, as well as the EU, UN, African Union to discuss the fight against the smuggling of migrants and human trafficking.

However, Niamey meeting deals in addition to the human trafficking deals with the presence of jihadist and rebel groups in Libya. Several United Nations reports on Libya and Sudan point to the need to end the presence of Chadian and Sudanese groups involved in the Libyan crisis.