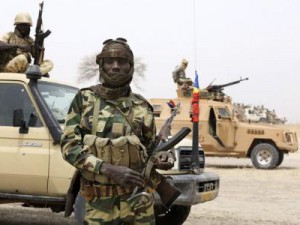 Chad’s chief prosecutor says that security forces have arrested one of the leaders of the Nigerian extremist group, Boko Haram.

Prosecutor Alhassim Khamis said in a statement on Monday that Bahna Fanaye, whose alias is Mahamat Moustapha, was apprehended on Sunday, along with two others. He said Fanaye co-ordinated the trafficking of weapons between Nigeria, Cameroon and Chad for the radical Islamic network.

Khamis said forces seized various weapons, communication materials, documents and more than 50 SIM cards from Fanaye’s home. He said a man described as the financier of the group was also arrested in another operation.

Chad has been a major military ally with Nigeria in the fight against Boko Haram, which has publicly threatened the Chadian president with retaliation.