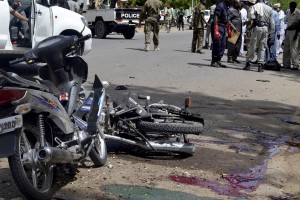 At least 27 people, including four suspected Boko Haram Islamist fighters, were killed and 100 others were injured on Monday in two attacks in Chad’s capital, N’Djamena, which the government blamed on the Nigerian militant group.

The attacks, which included at least one suicide bomb, are the first of their kind in Chad, an oil-producing nation and a major Western ally which has spearheaded offensives on al Qaeda-linked groups in Mali and on Boko Haram in neighbouring Nigeria.

“Boko Haram is making a mistake by targeting Chad,” Communications Minister Hassan Sylla Bakari said on state television. “These lawless terrorists will be chased out and neutralised wherever they are.”

Bakari did not give further details but Interior Minister Abderahim Bireme Hamid told Reuters earlier that there had been at least one suicide attack at police headquarters.

One foreign security source had earlier put the death toll more than 40, saying as many as 35 people were killed in two explosions at the police training school after an initial suicide bomb killed seven at a separate location.

“France stands by Chad and its African partners in the fight against terrorism,” spokesman Romain Nadal said.