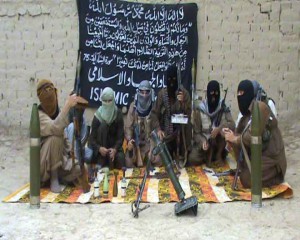 There has been a lot of trouble across northern Afghanistan in recent months and one reason is the arrival of militants from the Islamic Movement of Uzbekistan (IMU), Radio Liberty reported on May 12.

When the Pakistani military started a large-scale operation in North Waziristan last spring it chased IMU militants from their safe havens and sent them, with their families, across the border into northern Afghanistan. Since then they have spread out from the Badakhshan Province in the east to Badghis Province in the west.

Afghan officials, particularly those in the affected provinces, have noticed an upsurge in violence across the north during these last 12 months and have linked recent fighting to the arrival of “foreign militants.”

RFE/RL’s Turkmen Service, known locally as Azatlyk, organized a panel discussion to talk about the presence of militants from Central Asia, including the IMU, in northern Afghanistan, their activities, their motives, and their potential threat to regions outside Afghanistan.

There was steady fighting in five northern Afghan provinces during 2014: from west to east they are Badghis, Faryab, Jowzjan, Kunduz, and Badakhshan.  Most of that fighting was on the level of raids — attacks on government positions, involving a handful of fighters, on occasions maybe a couple of dozen, and at the end of the battle the enemy withdrew.

Attacks this year have involved more militants and they are often attempting to capture and hold ground.

Some of the heaviest fighting this year has taken place in northeastern Afghanistan, near the city of Kunduz (where fighting is still in progress), in the province of the same name, and in the Jurm district of Badakhshan Province, and the Marchak district of Badghis Province.

General Haydari said: “Lately foreign terrorists are gathering in Badakhshan. Those terrorists include Chechens, Tajiks, even Kazakhs and Uzbeks from the Jundallah group, not only the terrorists but they also bring their wives and children. During the last year they’re engaged in actions in Khostak that are against the government. They specialize in making bombs and train suicide bombers.”

North Waziristan has been the main IMU sanctuary since late 2001, when U.S. bombing chased the group from the northeastern Afghan regions where fighting has picked up this year.

As RFE/RL’s Siddique said, “They are looking for a new sanctuary in Afghanistan now and that’s why, there is, they’re trying to carve out a sanctuary in Badakhshan, which is strategically located close to Tajikistan, bordering Tajikistan and also Pakistan, and also in Kunduz.”

Siddique emphasized though that the IMU, or its offshoots such as “the Islamic Jihad Union, Jamaat Ansarullah, Jundullah, and Jund al-Khalifa,” seem to be coincidental participants in the hostilities in northern Afghanistan rather than Taliban reinforcements called in for the spring offensive.  “The IMU in essence is now this wandering group of militants” in northern Afghanistan, Siddique concluded.

Wandering, but still well armed and with years of combat and tactical experience, which they are now using to help the only group in Afghanistan that can shelter them — the Taliban.

But another unintended consequence of the Pakistani security operation in North Waziristan is that the IMU militants, for the first time in a decade, are present in large numbers along the border with Central Asia.  As the group passed the years in North Waziristan their ultimate goal of overthrowing the governments in Central Asia (Uzbekistan, Tajikistan, and Kyrgyzstan at least) seemed to have waned and been replaced by more immediate battles alongside their Taliban allies in Pakistan and Afghanistan.

The forced eviction from Pakistan could refocus the group’s goal.

Lawmaker Korakhil said she believes the IMU is now looking at Central Asia, and another country, but she added that is small consolation for Afghanistan at the moment.  “It’s true that to reach Central Asia they have to provide [for themselves] a safe home for them in Afghanistan so they can target the Central Asian countries or even some part of China, but that doesn’t mean they will not attack Afghans and you can see what’s happening with Afghan security,” Korakhil said.

However, the IMU does not appear to be acting as a cohesive organization at the moment.