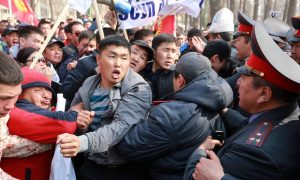 If preliminary reports from Kyrgyzstan’s intelligence services are correct, the bomber behind Monday’s blast in the St Petersburg metro was a native of the former Soviet republic, who had moved to Russia several years ago and taken Russian citizenship, like reported by theguardian.com.

Kyrgyzstan’s state committee for national security identified 22-year-old Akbarzhon Jalilov as the prime suspect behind Monday’s bombing, which killed 14 people and wounded over 40. Russian authorities believe the bomber died at the scene.

Acquaintances told Russian media that Jalilov had worked at a sushi bar and attended a wrestling club before disappearing from view in 2015.

If confirmed, it would be the first major terror attack carried out in Russia by someone from the central Asian republics and will be a worrying sign for Russian authorities.

The wave of terror that hit Russia in the 1990s and early 2000s was mainly linked to demands for Chechen independence. But in recent years, radical Chechens and extremists from other Muslim ethnic groups in the region have shifted their demands away from independence from Russia and towards the establishment of a Caucasus emirate. Many are fighting in Syria with Islamic State or other groups.

The former-Soviet central Asian republics, desperately poor and run by autocratic leaders, have simultaneously seen some Muslims there becoming radicalised.

Early reports suggest Jalilov was from Osh, in southern Kyrgystan. There are many overlapping factors that lead to disenfranchisement and potential susceptibility to radicalisation in the region. In 2010, Osh saw clashes betweenthe ethnic Uzbek and Kyrgyz populations that led to hundreds of people being killed, mainly Uzbeks. Jalilov’s surname suggests he is of ethnic Uzbek extraction.

Critics say the repressive religious policies of governments in Kyrgyzstan and other central Asian countries help make radicalisation a self-fulfilling prophecy. “When you push out the moderate Islamic alternatives you leave more potential for people to get radicalised,” one western diplomat based in the region told the Guardian last year.

The whole region is extremely poor, with many men feeling they have no option but to travel to work in Russia in terrible conditions for low pay, because the money they can send back is still more than they would earn if they stayed at home. According to Kyrgyz news sources, Jalilov went to Russia with his parents, but they later returned to Osh while he remained in Russia. His parents were being questioned by Kyrgyz intelligence.

Many Russians resent the large number of guest workers from central Asia, who are able to travel to Russia without visas, and everyday racism and police checks are facts of life for central Asians in Russia.

At first glance, Jalilov does not fit the profile of an impoverished construction worker. The particular circumstances of Jalilov’s radicalisation, if he does indeed turn out to be the bomber and to have been acting from radical Islamist motivations, are as yet unknown. But an investigation by the news site Meduzafound that many central Asians were being radicalised while working in Moscow.

“Everyone who comes from Moscow now says that Chechens come to the mosques and the building sites, explaining to migrants that they have to go live in Syria, where the caliphate is,” Hairullo Nazarov, from Kulyab in Tajikistan, told Meduza. His brother Nusrat was radicalised in Moscow and travelled to Syria to fight for Isis. “I think that those who go there, to Isis, they hate Russia for the conditions they have to endure to live,” he said.

Hundreds, if not thousands, of people from Kyrgyzstan, Uzbekistan, Kazakhstan and Tajikistan are believed to be fighting with Isis. The man believed to have killed 39 people in an Istanbul nightclub on New Year’s Eve was originally from Uzbekistan.