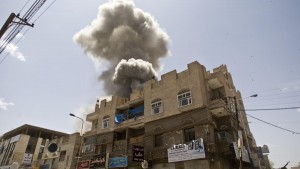 Pro-Houthi forces have launched dozens of artillery rockets from northern Yemen indiscriminately into southern Saudi Arabia. At least 12 civilians have been killed and over a dozen others wounded, Saudi government sources said. Residents of the Saudi border city of Najran confirmed official government and media accounts that the strikes damaged both military and civilian structures there.

“Pro-Houthi forces are killing and wounding Saudi civilians with artillery rockets that cannot be aimed at valid military targets,” said Sarah Leah Whitson, Middle East and North Africa director. “Houthi commanders need to stop their indiscriminate attacks or they can be liable for war crimes.”

On May 5, Saudi Arabia’s military stated that pro-Houthi forces had fired mortars and Katyusha rockets into southern Saudi Arabia from a mountainous border area inside Yemen. The strikes hit and damaged schools and a field hospital, killing three civilians in Najran, the military told the Saudi daily Arab News. A Saudi military base is in the center of the city.

The government Saudi Press Agency (SPA) reported that in another attack at 1 p.m. on May 6 a munition struck near Najran prison, which is adjacent to the military base. The strike killed a police officer and wounded a colleague. Other strikes that day killed four other civilians, including a migrant worker, and wounded 11 others, according to the SPA. On May 11, Saudi officials stated that munitions fired from Yemen around 7:30 a.m. struck a school and home in Najran, killing a Pakistani worker and wounding three residents.

Human Rights Watch could not confirm specific attacks reported by the Saudi government, but communications with Najran residents show that such strikes occurred. A resident of Najran told Human Rights Watch that on May 5 munitions struck residential neighborhoods near where he lived. “It just so happened that while I was going with my daughter near her school on the first day [of the strikes] we were hit by one of the munitions,” he said. “It hit our car but there were no injuries.”

The resident sent Human Rights Watch a photo of the remnants of the munition that he said struck his car. The identification of an expended rocket motor indicates that the remnants are an unguided artillery rocket of an unknown type. The absence of control surfaces at the nozzle means that the weapon is not a guided missile.

Other Najran residents told Human Rights Watch that among the buildings struck by munitions in Najran were the office of the Najran governor, the Saudi intelligence building, and private homes in the al-Fahad, al-Diyafa, and al-Khalidia neighborhoods.

Reported strikes were not limited to the Najran area. On May 6, the SPA reported that on the evening of May 5 a munition struck a private home in al-Bahtit village in Jizan Province, more than 125 kilometers southwest of Najran and 60 kilometers west of Saada, the Houthi stronghold in northern Yemen, killing a husband and wife and wounding three others. On May 11, the SPA reported that at 10:40 a.m. a munition fired from inside Yemen struck another border village in Jizan Province, killing one and wounding four others.

Human Rights Watch was not able to determine whether the rockets were launched by Houthi forces, whose main stronghold is directly across the border from Najran, or by forces supporting the Houthis. The Wall Street Journal reported on May 5 that three Houthi officials said that the attacks were launched by local tribesmen in coordination with the Houthis.

Governments providing financial or military aid to the Houthis and other Yemeni armed groups should urge them to abide by the laws of war, including the prohibition on indiscriminate attacks.

Military commanders must choose a means of attack that can be directed at military targets and will minimize incidental harm to civilians. Weapons that are so inaccurate that they cannot be directed at military targets without imposing a substantial risk of civilian harm should not be deployed. Forces deployed in populated areas must avoid locating military objectives near densely populated areas and endeavor to remove civilians from the vicinity of military activities.

A Saudi-led coalition, which includes Bahrain, Egypt, Jordan, Kuwait, Morocco, Qatar, Sudan, and the United Arab Emirates, has since March 26 conducted numerous airstrikes throughout Yemen against Houthi forces, also known as Ansar Allah, who effectively ousted the government of President Abdu Rabu Mansour Hadi in January. Some of these strikes have used banned cluster munitions supplied by the United States.

According to the United Nations at least 828 civilians have died as a result of the conflict, and more than 300,000 have been displaced. The strikes, as well as coalition-imposed restrictions on import of humanitarian aid and workers, have led to a “catastrophic” humanitarian crisis in Yemen, according to the International Committee of the Red Cross.