You are here: Home / MidEastGulf / Casualties on both sides in ISIS, Iraqi militia clashes in disputed Diyala 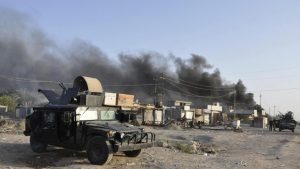 A series of clashes between Islamic State insurgents and Iranian-backed Hashd al-Shaabi militias in the disputed Iraqi province of Diyala on Sunday resulted in several casualties on both sides, according to reports.

Local media reports quoted security sources as saying that Islamic State sleeper agents launched a “major attack” against an outpost of the Hashd al-Shaabi – also known as the Popular Mobilization Forces (PMF) – and wounded four militiamen. The PMF militias in question were part of First Brigade, which includes the Badr Organization.

The incident reportedly occurred in Diyala province’s Khanaqin district in a rural area close to a religious shrine known as Baba Mahmoud. The location is near Mount Murawid, the rugged terrain common in the region that sleeper cells of terrorist groups often exploit to establish bases for their operations.

The so-called Islamic State later claimed responsibility for what seemed to be other attacks that had taken place southeast of Khanaqin in the Naft Khana region, which is close to an oilfield. The terrorist organization claimed to have killed at least four PMF fighters and wounded several others in three separate attacks.

The PMF then claimed it had initiated a counterattack against insurgents in the area, killing three Islamic State members, as per preliminary casualty numbers.

Reports indicate a general uptick in the number of sporadic attacks the terrorist organization has carried out over the past month.

Such assaults usually occur close to areas the Islamic State once controlled, mainly targeting Shia militias and Iraqi security forces. Diyala seems to be bearing the brunt of these terror activities.

These attacks come even as the US on Sunday announced they had killed the group’s purported leader, Abu Bakr al-Baghdadi, in an operation in northwestern Syria.

Senior Kurdistan Region leaders have warned that international governments need to use as much vigilance as ever in facing the remnants of the Islamic State.