You are here: Home / West Asia / Carter says there is an ongoing need to destroy Daesh in Afghanistan 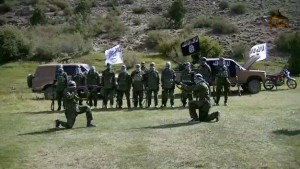 U.S Secretary of Defense Ash Carter said on Monday that he would support a peaceful transition of power but that there was an ongoing need to destroy Daesh not only in Iraq and Syria but also in Afghanistan.

Speaking in an interview forum hosted by The Atlantic on Monday in Washington D.C, Carter said: “…we need to destroy the fact and the idea that there can be Islamic State (Daesh) based upon this ideology and it needs to start there.”

“I just want to say that it …is necessary, it’s not sufficient. So, we also need to operate against it and are wherever it arises. Libya, Afghanistan, and so forth and then absolutely we need to protect our own people. And we do that every single day; protect ourselves from attack.”

He pointed out that after the 9/11 attacks in the U.S, NATO worked with them in Afghanistan and has been “working with us ever since to make sure that Afghanistan doesn’t once again become a place from which attacks on America or France or Germany or the United Kingdown or anywhere else in Europe are launched from.”

He said: “Our deepest sympathies go to the family and friends affected by this tragic loss. So we mourn their sacrifice, we reaffirm our commitment to protect the homeland, and help our Afghan partners secure their country and their future.”

On Friday a suicide bomber, who had been working at the base for four years, detonated explosives on the base. According to Afghan officials, the bomber had originally been a Taliban member but joined the peace process four years ago.

Meanwhile, a number of Afghan lawmakers said they believe that Daesh fighters are only present in Nangarhar province, but there are a number of other unhappy groups that commit crimes and want to show that they can announce their allegiance to Daesh at some point.

“This is an extremely concerning issue, because Afghanistan is a war-hit country. On one side, al-Qaeda is resurging while on the other, Daesh is recruiting in some parts,” said Sayed Nadir Shah, a member of the Wolesi Jirga (Lower House of Parliament).

Some members of Nangarhar provincial council, meanwhile said they believe that the presence and activity of Daesh is nothing more than propaganda.

“Some people say Daesh is in Ghor and other provinces. This is not true. Such propaganda should be prevented, because it benefits the fighters,” said Zabihullah Zmarai, member of Nangarhar provincial council.