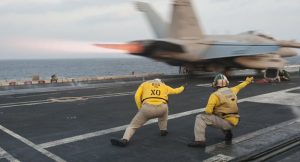 For the first time in over two years, carrier-launched U.S. aircraft conducted an airstrike against Islamic State targets in support of Operation Inherent Resolve, the global coalition battling the terrorist group in Iraq and Syria, like reported by stripes.com.

A pair of Navy F/A-18F Super Hornets from Carrier Air Wing 17, embarked on the USS Nimitz, conducted the strikes on Sept. 23, Cmdr. Rebecca Rebarich, a spokeswoman for the Bahrain-based 5th Fleet, confirmed via email on Monday.

“The last such strike was by USS Theodore Roosevelt in [March] 2018,” said Rebarich, who said the Super Hornets’ strike last Wednesday was carried out in Iraq.

“Daesh operatives will continue to try and take advantage of safe havens; but there is no safe place for terrorists to hide,” he said.

It was not clear whether that strike was carried out by the carrier-launched sortie. Rebarich referred questions about the Navy strike to Inherent Resolve, which did not immediately respond to an inquiry on Monday.

While there had been no carrier-launched strikes before last week for about 30 months, aircraft embarked on amphibious landing ships in the region have conducted strikes during that time, Rebarich said.

The Nimitz, which is the Navy’s oldest carrier in operation, has been deployed to the 5th Fleet area of operations since late July, accompanied by the Ticonderoga-class guided-missile cruiser USS Princeton, and Arleigh Burke-class guided-missile destroyers USS Sterett and USS Ralph Johnson.

On Sept. 18, the flattop entered the Persian Gulf along with the Princeton, Sterett and the guided-missile cruiser USS Philippine Sea, becoming the first carrier strike group to operate in the Gulf since the Abraham Lincoln departed in late 2019, the Navy said earlier this month.

The patrol, meant to deter aggression and ensure the free flow of commerce, comes amid high tensions between Washington and Tehran that have been ongoing since President Donald Trump unilaterally withdrew the U.S. from an Obama-era nuclear deal with Iran in May 2018.

A series of incidents since last year, including rocket attacks against bases and diplomatic compounds housing American and coalition personnel in Iraq, and U.S. strikes in response, have ramped up tensions in the region.

The U.S. reportedly warned Iraq over the weekend that it was preparing to pull out of its embassy in that country’s capital if Baghdad does not do more to quell the attacks, which American officials have blamed on Iran-backed militias.