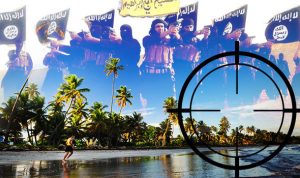 Chargé d’Affaires and Deputy Chief of Mission of the United States Embassy John McIntyre believes legislative changes must be made if T&T and the rest of the Caribbean region have to successfully combat counter-terrorism and recruitment of ISIS foreign terrorist fighters, like reported by guardian.co.tt.

Responding to questions from the media after donating two shallow search and rescue watercraft to the Penal/Debe Regional Corporation yesterday, McIntyre said counterterrorism was discussed at a meeting of all US ambassadors recently.

Saying he was very impressed with the full review that was done on regional counter-terrorism, McIntyre explained, “A lot of people were able to comment on it but the basis right now, the foundation is not up to the current situation and that’s why I think the laws have to change.”

Asked whether any agencies have been partnering with the US government to stop ISIS recruiting of foreign terrorist fighters, McIntyre said a full inter-agency approach was being undertaken to tackle this problem.

“I know there is a debate coming up, the ATA, the Anti-Terrorism Amendment, that was also a top topic for all of us, but with respect to Trinidad and Tobago, this is an island and a country of law and the solution to these problems is a legal solution. I think the Government, as well as the Opposition, has agreed that the current legal structure is not sufficient,” he said. (See other story)

He further explained, “When it comes to our efforts on counter-terrorism and countering violent extremism, we have been working with the Government, the Opposition and the civil society and more, for quite a long time. It’s a full inter-agency approach, its always been that way but we can always do more and we will continue to do more on that front.”

Asked whether the talks were successful, McIntyre said yes.

“I think the response to the Carnival threat is a great example of the responsiveness as we noted in our press releases along with three other governments, we were very pleased with the work the Government did to disrupt that threat.”

With regard to the passage of the Anti-gang legislation, McIntyre said this was commendable.

“I think any time you change the legal structure to allow the authorities to have more tools at their disposal to deal with the issue, that’s great, as well as ensuring there’s civil society protection for those that are accused. That’s very very crucial but we understand, just like we in America, that crime can be a devastating effect on all, on a personal level, on an economic level and so I think that anytime you provide the authorities with tools, legal tools to do more, its critical and very beneficial,” he added.

He refused to say whether he was concerned about the tension between warring Rasta City and Muslim gangs in T&T, saying he did not want to comment on domestic security matters.

However, McIntyre described the partnership with the US government, T&T Government, Opposition and civil society as one of the best.