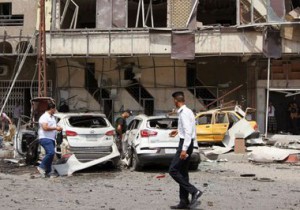 Car bombs ripped through car parks at two high-profile Baghdad hotels on Thursday that had been targeted in deadly attacks five years before, killing at least five people, police said.

The explosions occurred just before midnight and were heard across the city centre.  According to police and an interior ministry source, at least 13 people were also wounded.

One of the bombs exploded at the Ishtar, shattering windows of the recently renovated hotel and turning rows of cars and SUVs into piles of charred, twisted metal.

People traipsed through the site of the blast inside the walled hotel compound, while a group of men struggled to remove the smashed windshield from an SUV on the other side of the hotel.

The Ishtar is a popular site for wedding celebrations, and the area — which also includes a club and the Palestine hotel — is crowded with people on Thursday nights.

Another blast hit the car park of the Babylon hotel, another upmarket and recently refurbished hotel that overlooks the Tigris river in the Jadriya neighbourhood.

Police said security forces found another car bomb in the Babylon’s car park and defused it.

A years-old midnight curfew was lifted in February after Iraqi forces retook areas around Baghdad from the Daesh jihadist group and a huge car bomb-making cell was dismantled.

Attacks have continued since but are less frequent than the previous year.

Daesh, which is still battling government forces barely 30 kilometres (18 miles) west of the capital, has claimed many of the biggest attacks in Baghdad and elsewhere in the country.

The Babylon and Sheraton were hit in coordinated attacks in January 2010, together with the Hamra, which never reopened.

The attacks five years ago were carried out by suicide bombers and killed at least 36 people. They were claimed by Al-Qaeda in Iraq, the group that later became Daesh.