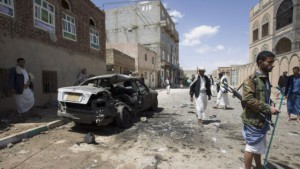 “An explosive-laden car struck a military checkpoint near the outer gate of the Presidential Palace in Aden’s neighborhood of Cirater, killing nine soldiers and injuring several others, ” the local security source said on condition of anonymity.

The source said that the terrorist attack occurred in a road leading to the main entrance of Ma’asheek Presidential Palace, where Yemen’s internationally recognized President Abdu-Rabbu Mansour Hadi is residing.

Medical sources in Aden’s Public Hospital confirmed that nine guards were killed in the attack but put the number of injured at “about 14.”

An intelligence officer told Xinhua by phone that the suicide car bombing was targetting the motorcade of Aden’s governor at the entrance to the presidential compound.

“Aden’s governor Gen. Aidarous Zubaidi was heading toward the Presidential Palace for a meeting when the explosion occurred,” the source said. “The governor escaped unharmed.”

The port city of Aden has been gripped by chaos and lawlessness during the past few weeks, resulted in the assassination of Aden’s former governor and several high-ranking security officers and judges.

In September 2014, Houthi rebels seized the Yemeni capital of Sanaa, forcing President Hadi and his government to flee to Aden and then to Riyadh, the Saudi capital.

In March 2015, a Saudi-led coalition started air strikes on military bases and arms depots of the Shiite Houthi rebels, and later sent in thousands of ground troops from the UAE, Qatar and other countries to back pro-Hadi forces.

Bolstered by heavy weaponry and Gulf troops as well as Yemeni fighters trained in Saudi Arabia and the UAE, pro-government troops managed to recapture Aden and four other southern provinces in July 2015.

No one has claimed responsibility for the bombing Thursday, but the Yemen-based affiliate of the Islamic State (IS) group had claimed earlier suicide car bombings against military installations used by Saudi-led coalition troops.