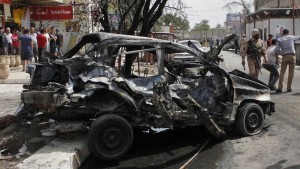 A Libyan medical official says that a car bombing in the heart of the eastern city of Benghazi has killed two people and wounded 17.

Mohammed Zwai, the head of the first aid unit in Jalaa Hospital, says a car laden with explosives detonated in the hospital’s parking lot on Monday. It’s the third attack targeting the hospital this year.

Zwai says the death toll is expected to rise as several of the wounded are in critical condition.

Benghazi, Libya’s second-largest city, has been the scene of more than two years of fighting between forces loyal to renegade military commander Khalifa Hifter and Islamic militants, including an Islamic State affiliate.

Last week, Hifter’s forces expelled Islamic militants from their key stronghold in the city but fighting continues in other areas.