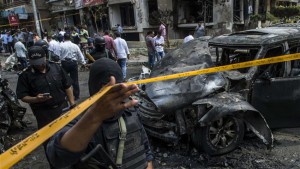 There was no immediate claim of responsibility for the blast, which also wounded 10 people.

Islamic State’s Egypt affiliate, Sinai Province, has killed hundreds of soldiers and police since the army toppled Islamist president Mohammed Morsi in 2013 after mass protests against his rule.