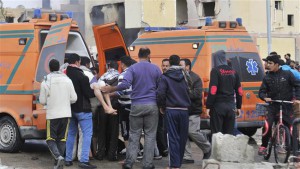 At least eight Egyptian soldiers have lost their lives when a group of unidentified armed men launched an attack against a military checkpoint in the country’s restive Sinai Peninsula.

Egyptian army spokesman Brigadier General Mohamed Samir said in a statement that the assailants were onboard utility vehicles “laden with large amounts of explosives” and attacked the checkpoint late on Thursday.

He added that a car bomb attack in addition to a fierce exchange of gunfire and a separate bombing claimed the lives of eight members of army forces. At least 12 troops were also reportedly injured.

Samir noted that three militants were killed and several others wounded in the fighting, without providing any information about the exact location of the attack.

Security sources said earlier that attackers fired two rocket-propelled grenades at the checkpoint south of the city of el-Arish, situated 344 kilometers northeast of the capital Cairo, and three pick-up trucks carrying masked men then drove by and opened fire.

There was no immediate claim of responsibility for the attack, but it had the hallmarks of those carried out by the Velayat Sinai group, previously known as Ansar Beit al-Maqdis.

Velayat Sinai militants have been responsible for most attacks in the Sinai Peninsula and Cairo that have increased ever since the country’s military ousted Egypt’s first democratically-elected President Mohamed Morsi in July 2013.

The military has been engaged in a high-scale security operation, dubbed “Martyr’s Right,” against militant positions in Northern Sinai since September 2015.

The operation got underway in the aftermath of coordinated terrorist attacks on several army checkpoints in the area, which claimed the lives of dozens of soldiers in July that year.

The militants pledged allegiance to the Daesh ]group, which is mainly active in Iraq and Syria, in 2014.