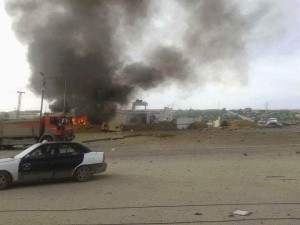 At least five guards were killed and 16 other people wounded when a car bomb exploded a checkpoint east of the Libyan capital Tripoli, a security source said on Tuesday.

Libya is caught in a conflict between two rival governments and scores of armed factions that back them. Islamist fighters allied with Islamic State are also active in parts of the North African country.