You are here: Home / Senza categoria / Captagon, the secret weapon of Islamic State 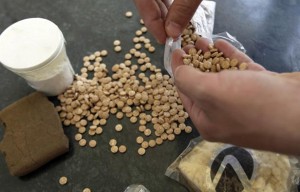 It may seem like—almost overnight— ISIS seized and occupied vast swaths of land from Syria to Iraq, with a group that is highly motivated and highly adaptive. However, what has enabled the group to achieve such success in capturing large territories? How have they achieved what other terror groups have attempted and failed at for so long? The answer may not be their abilities or even their ideology, but rather it seems to be a drug they use.

It’s already known across much of the developed world that the use of amphetamine, a drug that stimulates the central nervous system, can enhance an individual’s success. Many university students have been using amphetamine salts, Adderall in particular, to keep up with the increasingly intensified study programs. It is estimated that nearly 30% of university students in the United States use the amphetamine salt to increase their cognitive functionality, stay awake longer, and eliminate fatigue while studying. But just as something can be used with good intentions, it can also be used for bad intentions as well.

Adderall in itself is a powerful drug, which improves cognitive functionality and alertness, but what happens when a drug is made half with Adderall and half with Theophylline (similar to caffeine)? The result of that combination is a drug called Captagon. Think of it as a mixture of the effects of Adderall with an added coffee or energy drink stimulant— with a timed release.

How does this play into the current regional conflicts in the Middle East? It’s a rather simple answer with a more complex explanation. Since Captagon is so effective, it is used by extremist groups throughout the region and the world. However, with the destabilization of Syria, much of the pharmaceutical supplies have fallen into the hands of ISIS militants. This is when Captagon started to emerge as the drug of choice within the ISIS militant community and command. If the drug isn’t available, it isn’t too difficult for someone to create homemade concoctions, since the ingredients needed to create the drug are relatively available in the neighboring states of Syria and Iraq.

The use of the drug Captagon (medically used to treat ADHD and depression) has been documented by numerous opponents of ISIS who have found the drug on the bodies of dead ISIS militants and in their hideouts. Jordan, Turkey, and Lebanon have even captured people attempting to smuggle the supplies to Syria and Iraq. Recently, Saudi Prince Abdel Mohsen bin Al-Waleed bin Abdelaziz was allegedly caught attempting to smuggle 2 tons (approximately 1,900kg) of Captagon pills through Beirut’s Rafiq Hariri International Airport. If true, this revelation could support conspiracy theories that suggest that individuals within the Saudi Arabian government may be assisting ISIS militants.

Nevertheless, why does ISIS choose to use the Captagon drug as opposed to alternative narcotics, such as heroin, which are used by other groups? While drugs can cause feelings of pleasure that have been described as euphoric, a rush, and assist in numbing pain, it can be highly addictive and can lead to dangerous and spontaneous behaviors to feed the addiction. With Captagon, the negative side effects are limited and the addiction is miniscule in comparison. While the positive effects of the drug increasingly influences maximum fighter potential.

They use this as their drug of choice, in a way that it is used as a weapon. It is possibly the most powerful and dangerous weapon they possess. It has the aptitude to keep their fighters awake and alert, to learn quickly, diminish fatigue, and heighten morale due to its anti-depressant properties. In essence, it keeps the militants in the fight longer and more affective. When this drug is institutionalized across the board of the organization, it becomes a highly resourceful weapon that has been used against its adversaries.

The main negative side of Captagon is its “crash” effect, in which the drug wears off and the individual’s body involuntarily forces them to rest and/or sleep. Another side effect could cause the individual to become virulent, however that works in ISIS’s favor based on their mode of operation. However at an institutionalized level, these negative side effects are evaded by having militants work in shifts. As such, it becomes a weapon enabling the group to have a constant and productive force against a sober opposition. The opposition, inevitably, would be susceptible to fatigue, stress, and low morale.

This drug turned weapon, compiled with battlefield experience and acquired weaponry, is believed to be what has been driving the group’s progression over the past few years. It has enabled, what is assumed to be a minor number of fighters, to acquire immense swaths of land and challenge regional and global powers. To outside supporters of the group, it may seem that the group is highly motivated and successful, but what they don’t know is the groups’ morale and success is actually artificially attributed. While they may have successfully turned the drug into a weapon of war, the shortfall to this strategy will inevitably be its ability to resupply the drug. As security forces in neighboring countries step up their anti-narcotics operations, the supply line of Captagon will begin to slowly dwindle; and with it their morale.