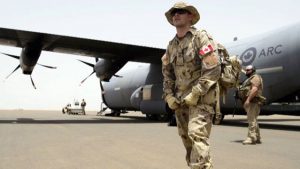 The risk of terrorist attacks, ambushes and the scorching desert heat are just some of the challenges that Canadian troops face as they kick off their peacekeepingmission in Mali, but the commander of Canada’s air task force says his troops are ready for what lies ahead, like reported by globalnews.ca.

“The aircraft are loaded with all the medical gear, all of my soldiers’ gear is inside of that and they sleep about 25 metres from the aircraft. That is our life for the next six to seven months,” McKenna told Global National.

“We’re ready to go as of tonight, absolutely.”

The Canadian troops will be tasked with coming to the aid of allied soldiers, UN peacekeepers as well as civilians, and McKenna says they’re leaving no stone unturned in their efforts to be as ready as possible.

“The response time we’re mandated to meet is a 30-minute launch in the day and a 60-minute launch at night, but we’ve been beating those by a good margin on every one of our four practice launches today,” said McKenna.

It’s a mission that is fraught with dangers.

Over 160 UN peacekeepers have been killed in Mali in just five years; large swathes of the country are lawless and plagued by Al-Qaeda-linked terrorist groups who strike with deadly frequency.

On Tuesday, gunmen attacked a government convoy that was carrying election materials, killing four Malian soldiers. It was the latest in a series of attacks that have beset Mali’s presidential elections, with authorities saying a fifth of all polling stations have suffered some form of disruption.

McKenna describes the preparation for possible encounters with militants as his biggest challenge in Mali.

“The bigger complexity for us is understanding all the various armed groups who might be either in the area of operations, or in and around a point-of-injury site,” he said. “And so we take great care to make sure the intelligence is feeding us what we can expect on the ground, and we can make sure that that area’s safe to land in and pick up injured soldiers and civilians.”

There’s also the challenge of protecting troops and their equipment from the unforgiving heat and unrelenting sandstorms.

“We’ve had very, very hot days here with humidexes over 50 degrees consistently. And we’ve had a lot of sand and very quickly-moving sandstorms and dust-storms that pop up,” said McKenna.  “So we have to take great care of the equipment we’ve been given to make sure we get this capability going.”

But all in all, McKenna says his troops are prepared for what is Canada’s first large-scale UN peacekeeping mission in over a decade, and conscious of the responsibilities that come with donning the Blue Beret, recognized the world over as a symbol of international peacekeeping efforts.

“The team are really devoted to the mission that we are doing. It’s a good mission. It’s all about saving people and helping people, and we’re getting a lot out of it as professional aviators and soldiers,” he said.

The mission is also a first for McKenna himself, in that while he previously served as a peacekeeper for NATO in the former Yugoslavia, this is his first time donning a Blue Beret.

“This is my first UN mission and yesterday my entire task force was standing on parade wearing blue berets, and there was a lot of pride. A lot of pride.”