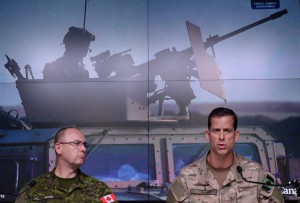 Canadian troops are more active on the front line in Iraq and have engaged in sporadic gunfights with Daesh as local security forces step up offensive operations to reclaim territory from the insurgents, commanders say.

Brig.-Gen. Peter Dawe, the deputy commanding officer of the Canadian Special Operations Forces Command, said the deployment of additional troops — due to a Liberal pledge to boost the ground mission — has expanded the Canadian presence “at the forward line with the Kurds in a significant manner.”

But that has also raised the dangers for Canadians as they spend less time in the classroom and more time in the field in their advise and assist role, overseeing the “execution of operations” bypeshmerga troops.

“We are more engaged on the line — there should be no doubt about that — and by extension, the risk has increased to our troops simply by virtue of time spent at the line and the work we’re doing right now in a more dynamic and fluid environment,” Dawe told a briefing Thursday.

A sign of that is the fact that Canadian troops have engaged in gunfire with Daesh fighters in recent months to defend themselves, Kurdish forces and protect what he called “non-combatants,” Dawe said.

“These occurrences have been sporadic in nature and have not resulted in any Canadian injuries,” he said.

Still, just how much more active Canadian troops are on the front line is a mystery as senior commanders refused Thursday to detail the activities of the soldiers, such as the number of airstrikes they’ve called in or how much of their time is spent at the front, all information previously disclosed by the military.

Dawe declined, for example, to say how often Canadians have engaged in firefights, though an official suggested later that it was fewer than a dozen times since January.

“There have been several instances over the last few months. I’m not going to get more specific than that,” Dawe told reporters.

He cited “operational security” for clamping down on information about the mission, known as Operation Impact.

“You’re dealing with a very crafty, well-informed enemy who are able to determine patterns in terms of our presence at the forward line . . . determine techniques, tactics and procedures, if we divulge too much,” Dawe said.

He said with the change in tactics by the Kurds, the Canadian mission has undergone a shift, with less training and more field work “at the line.”

He said the work that Canadians have done with peshmerga forces has “significantly degraded” Daesh.

“We’re not in the business of body counts . . . but I can tell you that the numbers are significant, the effect is significant and people shouldn’t underestimate the value of the Canadians forces and our (special operations forces) members,” he said.

Lt.-Gen. Stephen Bowes, commander of Canadian Joint Operations Command, said that while Daesh is back on its heels, it remains a “capable” force in control of large swaths of Iraq that it “defends aggressively.”

“It remains determined to fight and can still launch small-scale attacks,” Bowes said.

The battle against Daesh in Iraq is reaching a critical junction as Iraqi forces, backed by coalition troops, ready an offensive to reclaim the insurgent stronghold of Mosul.

Bowes said the role of Canadian soldiers after the fall of Mosul is unclear.

“We have to see what the outcome of that is, what the circumstances are on the ground. It’s impossible to speculate . . . about what kind of options might be considered,” Bowes said.

Still, Bowes said that defeating Daesh completely will take years, and predicted that the insurgent group will resort to terror attacks as it is forced from territory.