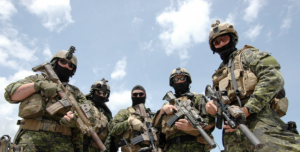 The fighting went throughout the night and Kurdish troops, backed by the Canadians, were able to push back the Islamic State attackers by Thursday.

There were no Canadian casualties, said Lamarre, director of staff for the Canadian Forces Strategic Joint Staff. A number of Kurdish soldiers were killed or wounded.

Kurdish officials said around 70 militants with the Islamic State of Iraq and the Levant — or ISIL — were killed during the battles in at least five locations along the Kurdish lines, north and east of Mosul.

Canadian special forces soldiers have previously called in airstrikes on ISIL targets, and its snipers have shot and killed ISIL gunmen. But this was the most significant military action the Canadians have yet faced in this mission.

Asked how many ISIL troops were involved in the attack, Lamarre responded: “A significant number. I would say in the hundreds.”

He noted that ISIL suicide bombers driving in vehicles also took part in the attack.

The offensive took the Kurds and Canadians by surprise and ISIL was able to make multiple excursions into the Kurdish areas.

Lamarre said Canadian special forces were involved in the fighting “right from the word go.”

During a counter-offensive led by the Kurds Thursday morning the Canadians provided support fire, he said. “They (the Kurds) came under effective fire and our guys were close enough and able to respond with fire onto those ISIL positions,” Lamarre noted.

Canada has around 69 special-forces soldiers in northern Iraq training Kurdish troops. The Canadian task group there has been made up of soldiers from the Ottawa-based Joint Task Force 2 counter-terrorism unit as well as the Canadian Special Operations Regiment from Petawawa.

The use of the CF-18s in battling back the ISIL offensive will likely fuel further debate about the Liberal government’s plan to withdraw the fighter jets from the mission.

Prime Minister Justin Trudeau has said his government intends to keep that election promise and instead beef up the number of Canadian training troops involved in the Iraq mission. No date has yet been set for the withdrawal of the CF-18s and Lamarre said the military is still awaiting orders from the government on that.

Lamarre noted that the Canadians were in an advisory role and that “the principal combatants were the Kurdish security forces.”

The emphasis on the importance of ground operations dovetails with the Liberal government’s decision to concentrate on training Iraqi security forces.

Defence Minister Harjit Sajjan released a statement Thursday night pointing out the value of the ground mission and the support given to the Kurdish security forces or KSF.

“Although the attackers were able briefly to penetrate KSF defensive positions, our forces played a role in advising and assisting the KSF to successfully launch a counter attack and re-establish defensive lines,” Sajjan said. “These actions illustrate the valuable contribution our forces are making to the KSF and the fight against ISIL. All Canadians can rightfully take pride in the professionalism of our members and the work of the coalition.”

Lamarre noted several times that the ability of the Kurdish troops to push back ISIL forces was “impressive.”

But he also acknowledged that the multi-pronged offensive was unusual for ISIL in the area. “It was a departure from what they have done in the past,” he added.

“There was an element of surprise that ISIL was able to bring to it.”

Foreign Affairs Minister Stephane Dion has said he expects the withdrawal of the CF-18s will happen “within weeks not months,” but the government first wants to work out details of a beefed-up Canadian training mission to Iraq before announcing the date the planes will return home.

Canadian CF-18s have dropped more than 500 bombs over the past year on ISIL targets, according to the Canadian military.

Despite a broad-based coalition of nations, the U.S. military is still conducting most of the bombing raids. The U.S. air force has used more than 20,000 bombs and missiles during the war.

Conservative MP Kellie Leitch, however, has accused the Liberal government of putting the Canadian military in the position “where they would be seen on the world stage as cowards.”

U.S. officials, however, have not objected to the withdrawal of the CF-18s as long as Canada continues to play a role in the war.

It has asked Canada to leave its refuelling aircraft as well as the two surveillance planes currently involved in the mission. Canadian military sources told the Citizen that the Liberal government is leaning towards agreeing to that request.

Also under consideration is Canadian help in developing a Kurdish special forces unit.

Dion has also suggested that Canada could join Italy in providing police trainers to Iraq.

There are more than 600 Canadian military personnel involved in the Iraq mission. Those include the special forces troops as well as air crew and staff in Kuwait who are supporting and operating six CF-18 fighter jets, two CP-140 Aurora reconnaissance aircraft and a CC-150 Polaris in-air refuelling tanker.