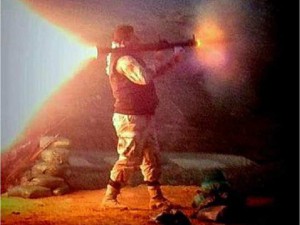 Anti-tank missiles have been fired by Canadian special forces and gunfire exchanged.

Iraqi security forces as well as the Canadian-backed Kurdish troops have been advancing on the Islamic State stronghold of Mosul and have engaged in heavy combat.

The number of such clashes involving Canadian commandos has been “substantial” and involves several dozen incidents, special forces commander Maj. Gen. Mike Rouleau revealed Wednesday at a briefing in Ottawa.

“This is the reality of modern conflict,” he added.

“There have been a substantial number of engagements.”

“When we shoot first there are emerging threats,” he added.

No civilians have ever been killed or injured in such engagements, according to Rouleau.

He did not have numbers on Islamic State gunmen who have been killed by Canadian troops.

“I do have the numbers but we don’t do body counts,” Rouleau explained. “It’s difficult to be precise.”

The number of clashes have increased because Kurds have gone on the offensive against the Islamic State, he added.

The mandate for Canadian troops to advise and assist Kurdish forces has not changed, Rouleau argued.

In most actions the Canadian troops have received fire from Islamic State forces and responded, he noted.

Canadian military officers and Liberal cabinet ministers insist none of the fighting can be considered as a combat mission.

While in opposition, Liberal leader Justin Trudeau accused then-prime minister Stephen Harper of lying to the public when it was revealed in January 2015 that Canadian special forces were calling in airstrikes and that Canadian snipers had killed Islamic State gunmen.

Trudeau then said that directing airstrikes and targeting ISIL forces with long-range rifles showed “troops have participated in ground combat.”

Then Liberal foreign affairs critic Marc Garneau also criticized the Conservatives for misrepresenting the Iraq mission and not “levelling with Canadians about what’s actually going on.”

Garneau, a retired Canadian Forces officer, put then Gen. Tom Lawson, then chief of the defence staff, on the spot by placing the Canadian military’s textbook definition of combat before him. “It says a combat operation is a military operation where the use – or threatened use – of force, including lethal force, is essential to impose will upon an armed opponent – or to accomplish a mission,” said Garneau. “Is this not what we’re doing in Iraq?”

But under the Liberal government, the size of the special forces contingent has increased from 69 to 200. Trudeau has said the mission is a non-combat one.

Conservative defence critic James Bezan, however, said in the House of Commons the Liberal government is continuing to mislead Canadians by insisting that Canadian troops are in a non-combat role.

Rouleau said a Canadian military hospital has treated 600 injured Iraqis so far. The hospital has not treated any Islamic State gunmen. “What we’re seeing is they want to fight to the death,” Rouleau said.

Lt.-Gen. Stephen Bowes, Commander Canadian Joint Operations Command, said he expects the battle for Mosul to continue for months. “Many of the fighters have nowhere to retreat,” he said.

Bowes said Islamic State gunmen prefer to fight to the death instead of surrendering.