You are here: Home / MidEastGulf / Canada votes for air strikes on Islamic State in Syria 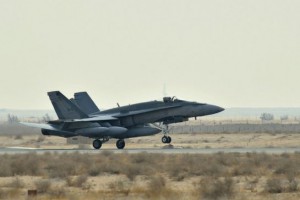 Canadian lawmakers voted Monday to extend a campaign of airstrikes against the Islamic State group and for the first time strike at them in Syria as well as in Iraq.

Prime Minister Stephen Harper’s Conservatives, wielding a majority in the House of Commons, pushed through a motion on enlarging the mission in a vote 142 to 129, despite opposition parties’ vigorous objections.

Canada first joined the US-led airstrikes on the ISIS group in November.

Its expanded air campaign was authorised until 30 March 2016.

Harper has defended the need for sorties into Syria, saying the ISIS group “must cease to have any safe haven in Syria”.

He pointed to its movement of heavy equipment across the Iraqi border into Syria.

At least six Canadians have died over the last two years fighting alongside extremists in Syria and Iraq.

In the aftermath of two jihadist-inspired attacks in Ottawa and rural Quebec last October, a majority of Canadians have told pollsters they support the military mission against the ISIS group.

Opposition parties, however, warned that airstrikes against the ISIS group in Syria may implicitly aid Syrian President Bashar al-Assad, and embroil Canada in a regional conflict that could drag on for decades.

“This is simply not Canada’s war to fight,” he said.

Canadian airstrikes in Syria are not authorised by the United Nations, nor is it a Nato mission.

They came under mortar and machine gun fire while training Iraqi troops near the frontlines in mid-January, and a Canadian soldier was killed by friendly fire on 6 March.