You are here: Home / Africa / Canada to sending more military helicopters to Mali 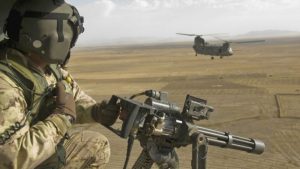 The Trudeau government is keeping the door open to sending more helicopters to Mali to ensure the Canadian Forces can provide round-the-clock medical evacuations in what is expected to be a harsh operating environment, like reported by thestar.com.

Canada is preparing to send two Chinook transport helicopters and four armed Griffon escorts to the African nation this summer as part of a commitment to support the UN mission there.

Those helicopters and about 250 military personnel are scheduled to leave in July and begin work on Aug. 1, Col. Chris McKenna, the commander of the helicopter detachment, told The Canadian Press on Wednesday.

While the detachment will likely be called upon at times to move troops and equipment across the arid landscape as required by UN officials, their primary mission will be evacuating injured peacekeepers and others.

That will entail having one Chinook and two Griffons on “perpetual standby, 24/7,” McKenna said, “so our crews are essentially sleeping almost beside the aircraft ready to launch.

“We are focused on getting to an incident site as quick as we can to be able to provide life-saving interventions for both soldiers and anyone else that the UN would choose to medevac.”

Such medical services are especially important given the nature of the UN mission in Mali, which has seen dozens of peacekeepers killed or injured in ambushes and roadside bomb attacks by local militants.

While that high tempo alone could be expected to put a heavy burden on the detachment, the extreme heat and dust at the UN mission in Gao, where the Canadians will be based, isn’t expected to make life any easier.

Both the Germans and the Dutch have lost helicopters in the area over the last couple of years in crashes blamed on technical problems caused by the environment. The accidents killed four peacekeepers.

McKenna, whose detachment recently wrapped up several days of training at Canadian Forces Base Wainwright in Alberta, described the environment as “the biggest enemy.”