You are here: Home / Analysis / Can the Takuba Force turn around the Sahel conflict? 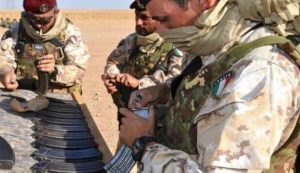 Two years after a pan-European military initiative was first proposed to help tackle the Sahel’s Islamist insurgency, the Takuba task force is finally becoming reality, as its first troops arrive amid the coronavirus pandemic, political turmoil and spreading unrest, likwe reported by voanews.com.

A group of roughly 100 Estonian and French special forces are the first on the ground to comprise Takuba, the Tuareg name for a sabre. Some 60 Czech troops are to join them in October, and another 150 Swedish ones by early next year. Estonia, Belgium and more recently Italy count among others to announce troops for the mission intended to help Mali and Niger forces fight extremist groups in the region.

But for now, and likely in the future, the main foreign troop contributor in the region is France, analysts say, whose own 5,100-troop Barkhane counterinsurgency operation enters its seventh year.

And despite recent military victories, they say, chances of eradicating the conflict are remote, unless the Europeans and Africans offer more holistic, long-term solutions.

“If you have a gushing wound on your neck, you don’t put a plaster on it,” said Andrew Yaw Tchie, a senior Africa security expert at the London-based Royal United Services Institute for Defence and Security Studies, or RUSI.

“We are all convinced that victory is possible in the Sahel,” Macron said, citing progress in recent months.

Emboldening his stance was the early June killing of a key Islamist leader by French forces with the reported aid of a U.S. drone. Abdelmalek Droukdel, headed al-Qaida in the Islamic Maghreb, one of the main groups operating in the region.

But other prominent jihadist leaders, including two linked to al-Qaida, remain at large, in a tangled conflict in which Islamist and local extremist groups have fueled and profited from inter-communal violence as well.

Overall, the United Nations estimates terrorist attacks against civilian and military targets in three of the most vulnerable Sahel countries — Burkina Faso, Mali and Niger — has increased fivefold since 2016.

In a recent interview with VOA, J. Peter Pham, the top U.S. envoy to the Sahel region, noted extremist attacks in Burkina Faso, Mali and Niger had increased 40 percent in the first quarter of this year alone.

Asked whether counter-insurgency efforts were winning, Pham added, “It depends on what time horizon you use and what definition you use for winning.”

While Droukdel’s death might be considered a “specific” success, he noted insecurity was expanding in Burkina Faso and central Mali, which “certainly cannot be counted a success.”

Against this backdrop, there is no unified international military response, says Bakary Sambe, director of the Timbuktu Institute in Dakar.

“Today, there are 19 different international strategies in the Sahel and no coordination,” Sambe said. “At a time when terrorist groups are beginning to coordinate, international partners are diverging.”

The Takuba task force is intended to facilitate regional coordination, as well as to provide equipment and training to Malian and other G-5 Sahel forces, which also hail from Niger, Mauritania, Burkina Faso and Chad.

Some observers see it as a test case for Macron’s broader goal of a more unified European Union defense, which a number of other EU member states are lukewarm about.

It’s also unclear how many European countries will ultimately commit to the Sahel initiative. Some, including Norway and Germany, have already bowed out for a mix of reasons. Britain, which formally exited the EU last year, plans instead to dispatch 250 forces to beef up the U.N.’s MINUSMA peacekeeping mission in Mali.

RUSI’s Tchie, who describes Britain as joining an “unwinnable fight in the Sahel” with its U.N. commitment, has similar reservations about the Takuba troops.

“In essence, all you’re doing is saying, ‘Let’s deal with counterterrorism, and at some point, we’ll deal with the other stuff,’” he said, summarizing what he considers the European thinking.

Yet such thinking, he added, fails to address interlinking problems, including climate change, corruption, poverty and underdevelopment that are fueling the conflict.

Adding to the challenges is the current political turmoil in Mali, where West African leaders are trying to find an exit plan to a crisis in which protesters are calling for President Ibrahim Boubacar Keita to quit.

Some regional forces have been accused of civilian abuses. For their part, extremist groups have capitalized on the coronavirus pandemic to further their interests, including staging attacks and recruiting new members, analysts say.

France faces its own set of challenges. Its Barkhane force has lost 43 men in its Sahel operations since 2013. It also faces a negative image in some countries, where memories of its colonial presence linger.

Takuba is partly intended to send the message that “France is not alone in the Sahel,” the country’s newspaper Le Monde wrote.

The Timbuktu Institute’s Sambe sees it another way.

“I think that wanting to realize Takuba is in itself an admittance that Barkhane and other foreign interventions have been a failure,” he said. “It’s been years that a purely security and military approach hasn’t functioned to eradicate terrorism.”

In London, RUSI’s Tchie draws parallels between the Islamist groups in the Sahel and Somalia, where the al-Shabab terrorist group has grown and spread despite years of U.S. and other military efforts. In both regions, he says, extremist groups have scored points in local communities, he says, in ways national and foreign intervention has not.

“It delivers justice, it delivers humanitarian relief to communities, and people feel more secure,” he said of al-Shabab. “It’s not that people want to go to al-Shabab. But when they need security, justice and things to work for them, al-Shabab delivers.”