You are here: Home / Africa / Cameroonian Police freed 70 children from captivity in a Quranic school 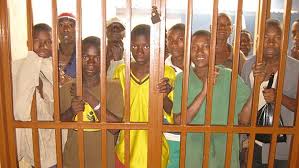 Cameroon’s gendarmes raided a house in the northern town of Ngaounderem Cameroon, at the weekend and freed more than 70 children, some of whom were in chains and suffering from disease and hunger.

It was reported that the owner of the house, which was used as a Quranic school, claimed the children were sent to him by their parents for discipline and correction.

He also married two of the girls in his care and insisted that he did no wrong.

Some of them had spent three years in chains and had scars inflicted from beatings, police officers told local media.

The school also held some adults, said the BBC’s Randy Joe Sa’ah in the capital, Yaounde.

The raid followed an anonymous tip-off given to the gendarmes