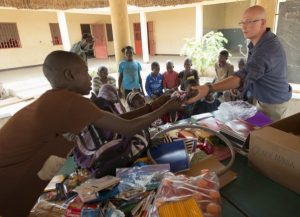 As a child, Kalcheinbe Salamon’s world came crashing down when his father murdered his mother. Devastated by the incident, he ran away from this northern Cameroon city to Yaounde, the country’s capital, like reported by army.mil.

He lived on the streets and scraped up a little cash pushing carts at a market before he found refuge at a group home for troubled youth. Years later, he returned to his hometown to live at a similar place called the Sarre Jabaamma youth rehabilitation center.

A team of civil affairs Soldiers visited the center Saturday to pass out school supplies and food to Salamon and about 20 other at-risk youth.

Today, Salamon is a young man at the age of 18 and is doing well in secondary school, according to the center’s director. He has dreams of attending college after he graduates so he can one day help people as a doctor.

“It has traumatized me,” he said about his mother’s death, speaking through a translator. “But all I’m focusing on now is for me not to be like my father and be a doctor someday.”

This is the sort of positive story Soldiers hope will be repeated among the other youth in the local area. With Boko Haram and other violent extremist organizations preying on street children to join their ranks, any kid off the streets is a victory in itself, they say.

“From a U.S. angle, that’s less children out on the streets who are less susceptible to any kind of recruitment from a VEO [violent extremist organization] or any kind of nefarious act,” said Staff Sgt. Brandon Collins, a member of the 83rd Civil Affairs Battalion’s Team 8321.

The four-person team is assigned to Task Force Toccoa, a 101st Airborne Division-led unit that was created in 2015 to support Cameroon’s fight against Boko Haram, which currently carries out operations just north of Garoua.

The rehab center is located next to the Garoua air base, where the task force has set up a contingency location. A portion of the civil affairs mission is to ensure the area around the base is secure. One way to do that is to assist those in need.

The humanitarian missions can also paint the U.S. Army as a friendly, caring force, which can then open avenues for new partnerships and persuade locals to come forward with information.

“That’s part of our job at civil affairs, to ensure that U.S. operations don’t hamper the local population, but also that the local population has a positive image of the U.S.,” said Collins, 28, of Niles, Ohio. “Anytime we can go out and provide assistance, it enhances our relationship with the community.”

As for the group home, Collins said his team will look to address specific issues there to keep more children off the streets.

“We’re also looking for various non-governmental organizations that could possibly provide any kind of aid, whether it’s monetary donations, food or clothing,” he said.

While the rehab center gets some help from an Italian NGO, it still doesn’t get support from the Cameroonian government. As a result, it struggles to feed and clothe children as well as send them to school, which costs about $5 per child each year.

“The state cannot finance services like this,” said Robert Awe, the home’s director. “If it wasn’t for the NGO, all of the children would be exposed to the streets.”

Awe estimates there are about 400 children living on the streets of Garoua. His group home can handle only up to two dozen of them, so he also conducts outreach projects to engage youth.

Last year, Awe said, some homeless children were persuaded with money to leave the city with an unknown man. Later, he found out that the children had been recruited to be fighters for Boko Haram.

“It is something that has been going on [for some time],” he said through a translator. “That has been our main concern after getting this information.”

Awe and others have since stepped up their outreach, he said, so they can reduce the terrorist group’s recruiting pool.

“We have been vigilant about this situation,” he said. “We are putting in more effort to talk to the children and tell them to be careful, to concentrate on their education, and not to go with people who they do not know.”

And since this issue can impact U.S. Army operations, the civil affairs mission plans to look deeper into extending the group home’s reach.

“It helps our security posture, and it helps the locals,” Collins said. “It’s a win-win situation to provide any kind of donations to organizations like this.”