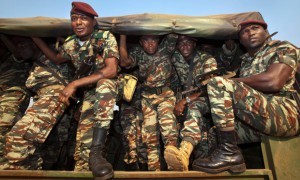 Cameroon’s army has repulsed an attack by Boko Haram and killed three of the Nigerian Islamist militants in heavy fighting in the Far North region of the country, a Cameroon government spokesperson said on Thursday.

The attack represented a change of tactics by the militants following a series of battlefield defeats this year in which they have lost territory to a regional force that comprises Nigeria, Niger, Chad and Cameroon, spokesperson Issa Tchiroma said.

“Early Tuesday morning around 03:40 an enemy column in four-wheel drive vehicles opened fire on positions held by our defence forces,” he said of the attack in Bodo town.

“There followed violent combat until dawn. Faced with the repost of our soldiers, the aggressors beat a retreat leaving behind three dead, a quantity of weapons and a lot of blood,” he said, adding that no government soldiers were hurt.

The militants are trying to “make their voice heard and prove that they continue to exist,” he said. Boko Haram rarely comments directly on military action and there was no independent confirmation of the battle.

Two military sources close to the fighting who declined to be identified said 18 militants were killed in the fighting.

The regional operation has reduced attacks in recent months but bombings in Nigeria suggest Boko Haram may be shifting its focus further south and west, towards the capital, Abuja.

Boko Haram has been trying to establish a state adhering to strict sharia law through an insurgency that began in 2009. It controlled an area larger than Belgium at the end of 2014 before the regional offensive began.