You are here: Home / Africa / Cameroon reviews agreement with Mali over terrorist threat 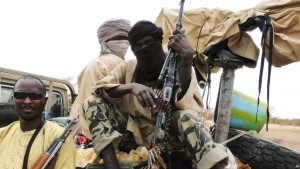 Cameroon and Mali on Tuesday concluded a review of a 50-year agreement on free movement of people and goods between the two countries because of the threat posed by Nigeria’s islamist sect Boko Haram.

The review affects the agreement on exemption of visa for travellers from the two countries which was signed on May 6, 1964 in Bamako.

“The policy enabled a Malian who lived in Cameroon, just like a Cameroonian who lived in Mali, to enjoy the same rights as the nationals of that country,” Mali’s Foreign Minister Abdoulaye Diop told Xinhua on Tuesday in Yaounde.

Due to the agreement, Cameroon today hosts on its territory about 20,000 Malians, and some 4,000 Cameroonians live in Mali, Cameroon’s foreign affairs ministry estimates.

“It is evident that there are some challenges facing Cameroon today, especially at the regional level, which makes it necessary for the country to review some of its legislations. We understand the challenges Cameroon is facing and we want to be of help in this regard. Just like we have a feeling our Cameroonian brothers have understood the constraints faced by Mali,” Diop affirmed.

He was alluding to the jihadist threat to the security and stability in the two African countries.

Cameroon’s Foreign Minister Pierre Moukoko Mbonjo recalled that a Cameroonian delegation visited Bamako in February this year to hold talks on the need to “review some agreements during the establishment of the existing bilateral relations between Mali and Cameroon.”

In the new agreement, he said, everything has been done to preserve the achievements, so that our special relationship can continue.

“Some modalities have changed, especially with regards to the demand for an entry visa for the personal category,” Mbonjo explained.

According to his Malian counterpart, “the personal visa will be given in more friendly conditions and it will be made accessible to our citizens. But there will be exceptions for holders of diplomatic and service passports.”

The coming into force of the new agreement will also see Cameroon open its consulate in Bamako and it will result into the transfer of Mali’s honorary consulate in Douala, Cameroon’s commercial capital, to the capital Yaounde.

Further, the two countries also plan to hold the long awaited meeting of their Joint Bilateral Cooperation Commission and sign another agreement for reciprocal promotion and protection of investments.