Hundreds of hostages held by the Islamic terrorist group Boko Haram were freed over the weekend after a joint raid by Cameroonian and Nigerian forces. The raid followed increased U.S. military efforts to cooperate with regional governments against the jihadist group, which has killed more than 20,000 people over the last six years. Gwen Ifill talks to special correspondent Nick Schifrin for more. 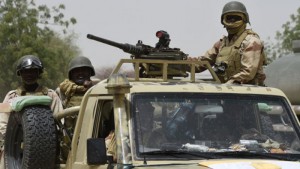 GWEN IFILL: Over the weekend, several hundred hostages of the Nigerian Islamist group Boko Haram were freed. It happened during a raid by Nigerian and Cameroonian forces along the border between the two African nations.

The raid comes as the U.S. military has moved to increase cooperation with regional governments to fight the jihadist group. Boko Haram pledged allegiance to the Islamic State group, or ISIS, last year. According to Amnesty International, the six-year uprising has killed more than 20,000 people. Another 2.8 million have been forced from their homes in Nigeria, Cameroon, Niger, and Chad.

Boko Haram gained worldwide infamy in 2014 after kidnapping more than 200 schoolgirls from the town of Chibok in Northeastern Nigeria. That sparked a global campaign to free the girls, with the hashtag #BringBackOurGirls as a social media rallying cry. The girls’ plight was a contributing factor to then-President Goodluck Jonathan’s election loss last year.

The U.S. has military personnel operating a new drone base in Cameroon to provide intelligence. And there is now discussion of sending American special forces near the front lines of Nigeria’s fight against Boko Haram. They would advise the military in its operations.

I’m joined now by special correspondent Nick Schifrin. He’s currently on assignment for us in Nairobi, Kenya, and he reported in-depth from Nigeria for the “NewsHour” last year.

Nick, it’s good to talk to you again.

So, tell us what you know about this new U.S. engagement in Nigeria.

There’s a new recommendation by the U.S. military’s top Africa Command that one to three dozen special operations forces troops be deployed to Northeastern Nigeria. This is what the military calls an advise-and-assist mission.

They are towards the front lines, but not really on the front lines, advising the Nigerian military in their fight, assisting that fight, things like intelligence and training those troops. Now, this is just a recommendation right now. This will have to go through the State Department and the Pentagon and the White House.

But this is what the military in Africa wants. And it’s what one military official describes as a national progression to a real escalation in what the U.S. has been doing against Boko Haram and helping the Nigerians. The first step in that is intelligence. There’s a new drone base in nearby Northern Cameroon. Predator drones have been supplying the Nigerian and the countries all along the Lake Chad Basin with imagery, with intelligence, so they can go after Boko Haram.

And, Gwen this is in addition to real concerted effort diplomatically to try and help the Nigerians improve things like the police. So, this is a real escalation in the U.S. helping Nigeria and all the countries fighting Boko Haram.

GWEN IFILL: It seems like one of the big differences between then and now is the presence of a new Nigerian president, Muhammadu Buhari.

NICK SCHIFRIN: Yes, it’s an extraordinary difference, a real sea change of a difference when he was elected.

Just to give you a sense, Gwen, of how bad the relationship between the U.S. and Nigeria was before his election, at one point, the top U.S. military official in Africa refused to shake the hand of the Nigerian chief of army staff. That’s how bad that relationship was.

One of the U.S. deputies was actually locked out of a Nigerian base at one point, a kind of message by the Nigerians that they were upset. Since then, total sea change. Muhammadu Buhari has not only changed the heads of the military, so the actual officials doing this work, and that relationship has improved between the U.S.

But he’s really said to all of his deputies, look, the U.S. is our ally. We need to work with them against Boko Haram.

GWEN IFILL: Let’s talk about the strength of Boko Haram. How strong are they and how extensive is their influence?

NICK SCHIFRIN: At one point, Boko Haram was the deadliest terrorist group in the world. That was by 2014, by the numbers of people killed.

But it’s important, Gwen, to note that that was less about Boko Haram than about the Nigerian military. In some sense, Boko Haram didn’t really have a foe on the battlefield. Nigerian soldiers were going out without bullets, without shoes, without the actual material they needed to fight Boko Haram.

And so Boko Haram was able to take over land, was able to kill so many people because it really wasn’t encountering the Nigerian military or any of the militaries in the region. Now that’s not changed not only in Nigeria. But Chad, Niger, Cameroon, they have all come together, with a little bit of U.S. help, to face Boko Haram.

And it’s clear that, right now, Boko Haram is on the back foot. It cannot seize any land anymore, even as it still launches suicide attacks that are still deadly in Nigeria.

GWEN IFILL: Finally, Nick, for many Americans, the last thing they heard about this question of Boko Haram’s strength in Nigeria has centered around hostage-taking, specifically about those Chibok girls.

Where does this stand now? We keep hearing that thousands of hostages have been released, but not so much about the girls.

NICK SCHIFRIN: Yes, this is another example of how Boko Haram is still around, but weakened.

Tens of thousand of people were taken hostage by Boko Haram at its peak. Thousands of them have been released by the Nigerian military, by the Chadian military, who are going into former Boko Haram strongholds.

But the girls themselves are still missing. President Buhari says he is willing to negotiate with Boko Haram to release those girls. He’s willing to release Boko Haram prisoners, but he says that he hasn’t found the right Boko Haram negotiators to do that.

So, right now, those girls are still missing. And, Gwen, as you know, such a tragic part of the story, some of those girls or girls in general being kidnapped are now being used as suicide bombers in some of these attacks.

So, there is a still a very big effort by the U.S. and Nigeria to find those girls, but so long after those kidnappings, there’s still no sign of them.

GWEN IFILL: Reporting for us tonight, Nick Schifrin. Thank you.