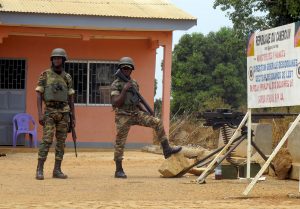 The Cameroonian Defence Forces are crediting the construction of a trench along the country’s border with Nigeria with significantly improving the security situation in the country’s Far North region, like reported by janes.com.

Work on the trench began in October 2016, when an experimental 20 km long section was dug between Guiwess and Tilde, a colonel in the Rapid Intervention Battalions (BIR) told Jane’s . With the soundness of the concept confirmed, a second 10 km section was dug in early 2017 before the rainy season stopped work.

More extensive digging began when the dry season returned in September 2017 and the length of the trench increased to 120 km by late April, according to the BIR colonel. The plan is to eventually extend it further southwards to reach a length of 213 km. There is no need to extend it further north as the El Beid River, which runs along the border to Lake Chad, forms a natural barrier.

Designed to prevent armed militants, especially ones from the Nigerian group known as Boko Haram, from infiltrating into Cameroon, the trench is more than 4 m wide and 3 m deep. It has been dug by a new BIR engineering unit that has been equipped with excavators, which is also tasked with repairing damage caused during the rainy season.

The trench is patrolled by BIR detachments, troops from the Cameroonian army battalions serving under Cameroon’s Sector 1 of the Multinational Joint Task Force (MNJTF), and members of the Civilian Vigilance Committees.

The single Cessna 208 surveillance aircraft and unmanned aerial vehicles (UAVs) from the BIR’s Air Observation Group (GOA) carry out surveillance flights to monitor the trench and locate any attempts at crossing it.