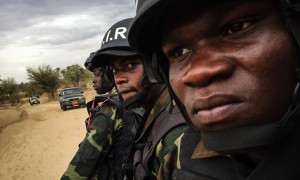 The head of an elite unit of Cameroonian soldiers helping lead the military campaign against Boko Haram died in a battle with the Islamist militants along the border with Nigeria, L’Oeil du Sahel reported.

Captain Yari Emmanuel, the head of Cameroon’s Rapid Intervention Battalion, was killed during a joint operation with Nigerian forces on Boko Haram positions on Thursday, the newspaper reported. At least 27 militants died in the fighting, it said.

Thousands of people have been killed in neighboring Nigeria as a campaign by Boko Haram militants to impose their version of Islamic law enters its seventh year. The violence has spilled over to Cameroon, Chad and Niger, spurring those nations to contribute soldiers to a regional force to defeat the group.