You are here: Home / Africa / Cameroon deports 2 000 Nigerians in fight against Boko Haram 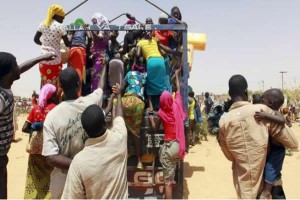 Cameroon has deported more than 2 000 Nigerians who were living in the country illegally as part of new security measures intended to prevent suicide attacks by Boko Haram jihadists, sources said Friday.

Regional newspaper L’Oeil du Sahel reported that about 2,500 Nigerians had been “rounded up” in Kousseri, in the far north of Cameroon, and sent back to their country on Thursday.

The weekly posted a photo on its Facebook page showing several departing trucks crammed with hundreds of passengers.

A source close to regional authorities confirmed that “more than 2 000 ‘irregular’ Nigerians have been expelled from Kousseri”.

Mey Aly, an official from a local NGO, said that most of the Nigerians “had fled the atrocities of Boko Haram” to take refuge in Cameroon.

Thursday’s deportations came just a day after Nigerian President Muhammadu Buhari visited Cameroon for talks on how to combat the escalating regional threat from Boko Haram.

Buhari and Cameroonian counterpart Paul Biya pledged to strengthen co-operation between their two countries in the fight against the insurgents.

The Cameroonian border post at Kousseri – which has been hit by two suicide attacks since June – occupies a strategic position, with just a bridge separating it from Chad’s capital N’Djamena.

Authorities in Cameroon’s far north have taken significant steps to boost security, including banning women from wearing the full face-veil amid fears that suicide bombers could use the garment to conceal explosives.

“With these attacks, the tone of the authorities has changed,” said a security source in Maroua. “They have asked that foreigners [notably Nigerians] and displaced people in the border areas go home.”

Some 300 Cameroonian children were removed from their Koranic schools in Maroua and taken back to their villages on Friday, according to a source close to local authorities, as the schools’ managers feared that insurgents could try to use them for suicide attacks.

Boko Haram’s bloody insurgency in Nigeria has left more than 15 000 people dead since 2009 and has increasingly spread across the country’s borders, with Chad and Cameroon suffering deadly suicide bombings in recent months.