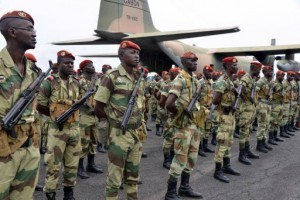 “Almost 2,000 extra soldiers will be deployed in the Extreme North region,” on the border with northeastern Nigeria, according to the report on Cameroon Radio-Television, which gave no timetable for the operation.

The reinforcements will raise to 8,500 the number of troops deployed to take on the Boko Haram insurgents, who have attacked villagers and towns inside Cameroon for two years, massacring and abducting civilians.

In the past fortnight, an unprecedented series of five suicide bombings by Boko Haram has claimed dozens of lives, including 33 people killed by teenage girls in three attacks on the market town of Maroua.

Since Sunday, seven people were slain in village raids, three of whom were beheaded, according to local security sources.

Cameroon has joined a regional campaign alongside Chad, Niger and Nigeria itself to battle Boko Haram, which has killed at least 15,000 people since 2009 in the name of founding an Islamic caliphate.

After more than seven months of delay, the deployment of a long-awaited Multinational Joint Task Force of 8,700 soldiers, police and civilian personnel has been announced for the end of July.

Nigeria’s small western neighbor, Benin, has been sitting in on high-level military talks and will be a part of the task force, to be based in Chad’s capital N’Djamena.

The Chadian army is engaged in a major military operation against Boko Haram forces that have fallen back on the many islands of Lake Chad, a key location where the borders of Cameroon, Chad, Niger and Nigeria converge.