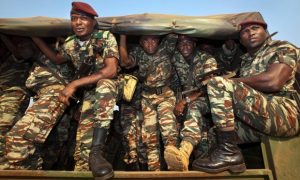 The Cameroonian Army announced the arrest of six members of the extremist armed group Boko Haram and 25 women who accompanied them while trying to obtain food and weapons.
Some of the women declared that their husbands are members of Boko Haram and are in Nigeria, adds the communication, signed by the commander of the Cameroonian Army Rapid Intervention Battalion, Alban Toupo.

The group was arrested in the city of Kolofata when they transported arms, ammunition, foodstuffs, materials to manufacture explosives and medicines to Nigeria using Cameroonian territories as a transit point, noted the spokesman.

The suspects, denounced by the population, on previous occasions have made the journey with the same purposes using minors, the source added.

Boko Haram swore allegiance to the terrorist Islamic State in 2015, and besides operating in Nigeria, where it has its headquarters, also carries out attacks in Cameroon, Niger, Chad and Mali.