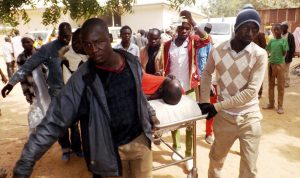 The deadly blasts happened in Kolofata, where nine people died in a double suicide bombing in early June.

“There were eight killed, six civilians and the two attackers,” a source close to Cameroon’s security service said of Wednesday’s violence.

Another security source confirmed the death toll, but no further details were immediately available.

The Far North region, which borders Nigeria, has seen a resurgence in attacks blamed on Boko Haram after months of relative calm.

In mid-June two civilians were killed in an attack in Limani, which is near Kolofata and the Nigerian border. Earlier in the month a soldier was also killed in Kolofata