You are here: Home / Africa / Cameroon: 5 killed in Boko Haram attack near border with Nigeria 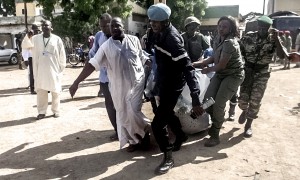 At least five people have been killed in Cameroon during an attack blamed on Nigerian terror group Boko Haram. The five bodies were found in the Logone-et-Chari area, in the country’s Extreme-Nord Province. A member of the Cameroon Air Force was also killed in Afade by friendly fire, according to news agency L’Oeil du Sahel.

The latest terror attack occurred a few days after Cameroon forces killed at least 10 militants after entering the village of Ashigashia, on the border with Nigeria. The village had been occupied by Boko Haram forces for three weeks in 2014, before Cameroonian forces recaptured it.

Boko Haram has killed thousands of people in northern Nigeria and neighbouring countries since its insurgence became violent in 2009. The Islamist outfit, which aims to establish an Islamic caliphate, often carries out attacks in Cameroon, which is involved in a regional offensive also comprising troops from Nigeria, Chad, Niger and Benin.

In July, Nigeria’s President Muhammadu Buhari visited Cameroon to strengthen cooperation between the two the countries and improve relations that had deteriorated over land disputes in 1990s. Cameroon also announced it would send 2,000 military reinforcements to the north of the country, on the border with Nigeria, following deadly attacks blamed on Boko Haram that left hundreds dead.

In August, Cameroonian authorities arrested two suspected Boko Haram members disguised as female refugees. The men, who were carrying explosives in their luggage, were stopped at the Minawao refugee camp in the north of the country, near the border with Nigeria. The country is also believed to have expelled some 12,000 Nigerian refugees who had fled Nigeria due to Boko Haram violence.

It is believed that the group recently appointed a new leader after Abubakar Shekau failed to appear in the group’s latest propaganda videos, triggering speculations on his fate. The announcement was made by Chad’s President Idriss Deby. Neither Boko Haram nor the Nigerian government have yet confirmed that change in the leadership.