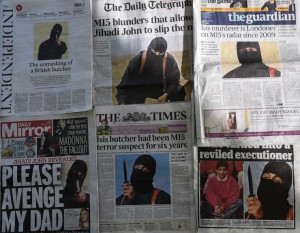 The success of the Islamic State group’s extremist ideology, which has attracted thousands of young Britons over the last few months to fight for ISIS abroad, has prompted British Prime Minister David Cameron to craft a five-year plan to counter the group’s message and allure. According to recent government estimates, up to 2,000 British jihadists have joined ISIS in Iraq and Syria.

In a speech, expected to be delivered Monday in Birmingham, Cameron will call for the need to create a more cohesive nation, unify young Muslims living in Britain and create more opportunities for ethnic minorities to prosper in the country, the Associated Press (AP) reported Sunday, citing excerpts of the speech released by Cameron’s office.

“Indeed, there is a danger in some of our communities that you can go your whole life and have little to do with people from other faiths and backgrounds,” Cameron will say, according to the statement. “So when groups like ISIL seek to rally our young people to their poisonous cause, it can offer them a sense of belonging that they can lack here at home.”

According to Cameron, many British citizens are not attached to their country, making them vulnerable to radicalization methods used by extremist organizations. The U.K. leader will offer a plan to find ways to increase opportunities for young people from ethnic minorities, which will help increase their integration into British society.

Cameron will also urge Britain’s Muslim community to play a key role in fighting ISIS and its extreme views.

“There are so many strong, positive Muslim voices being drowned out,” Cameron will say, in the speech. “Ask yourself, how is it possible that when young teenagers leave their London homes to fight for ISIL, the debate focuses on whether the security services are to blame?”

“We are talking and discussing at the moment, including with the opposition parties in Britain, what more we can do. But be in no doubt we are committed to working with you to destroy the caliphate in both countries,” Cameron told “Meet the Press.”

Last week, U.K. Defense Secretary Michael Fallon said that Britain’s Royal Air Force had stepped up its surveillance and spying missions over Iraq and Syria as part of “a new Battle of Britain” against ISIS.

In June, Cameron said that the U.K. would send an additional 125 troops to Iraq, for the first time since 2009, to fight ISIS, taking the total number of British military personnel involved in the battle against the militant group to about 900.