You are here: Home / Mediterranean / Cameron issues warning to EU over wave of hundreds of thousands of migrants from Libya 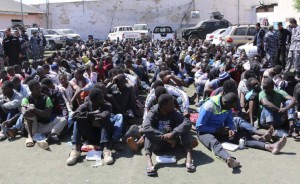 David Cameron is to issue a stark warning to fellow EU leaders over the arrival of a new wave of migration to the continent from Libya. The EU has said the surge could see as many as 450,000 refugees landing on Europe’s southern shores in 2016.

The prime minister’s comments come as 27 EU heads of state are meeting in Brussels to discuss a deal struck with Ankara to manage the flow of refugees arriving from Turkey to Greece. However, Cameron is to warn of the renewed arrival refugees predominantly from Sub-Saharan Africa through Libya as Mediterranean seas calm in the summer.

Since the start of 2016, 9,492 migrants have arrived in Europe from Libya to Italy. On the crossing, which is even more perilous than the eastern route from Greece, 97 have been killed trying to reach Europe’s southern shores.

In 2015, 153,842 migrants arrived on the route but the EU has warned the figure could be much higher in 2016. The news website Politico obtained a letter to EU foreign ministers from European foreign affairs chief Federica Mogherini saying as many as 450,000 refugees in Libya “could be potential candidates for migration to Europe”.

Speaking in parliament yesterday (16 March) Cameron said he would put a vote the use of “conventional forces” in Libya as western nations debate an intervention in the North African country. Prevailing anarchy in Libya and a booming war-time economy following the country’s revolutionary war in 2011 has caused unprecedented migration from Libya to Europe.

An EU naval force, including British warships, is engaged in an operation in the Mediterranean to prevent people smuggling from Libya. However, plans to break up trafficking gangs cannot move forward before the go-ahead is given by a unified government in Libya.

No.10 has said Turkey is stepping up coastguard operations against smugglers, according to the Press Association. The number of migrants arriving in Greece falling from around 18,000 to 11,000 a week.

Some 300 migrants were returned from Greece to Turkey in the first week of March, and 250 have been sent back in the past few days. Already 24,000 migrants have already been intercepted travelling on the eastern Mediterranean route in 2016, compared with 90,000 in 2015.